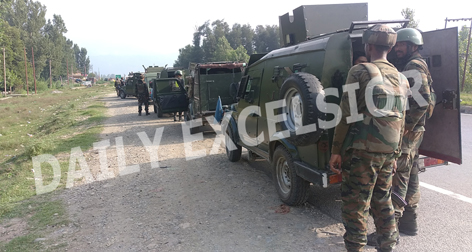 Srinagar, Aug 12: Security forces today trapped two militants of Lashkar-e-Toiba (LeT) in a building in Mir Bazar area of South Kashmir’s Kulgam district after they attacked a BSF convoy in the area.
Click here to watch video
Inspector General of Police Kashmir, Vijay Kumar, who is monitoring the operation from the spot along with the GOC Victor Force told Excelsior that CRPF Road Opening Party fired at the militants and reinforcements of Army and Police was sent to the spot, area was cordoned off and militants were trapped in a nearby building.
The militants fired indiscriminately on security forces in which one CRPF personnel and two civilians were injured. The CRPF man has been identified as Umesh Singh son of Prabu Singh of Jharkhand and he was shifted to emergency hospital Qazigund for treatment.
The IGP and the GOC immediately rushed to the spot and are monitoring the operation. However, they returned at around 10 pm and cordon around the building has been strengthened to prevent militants from fleeing the area.
“The operation will take time as the building is very big and concrete and troops want to minimise the collateral damage”, said an official.
In the wake of gunfight, traffic has been halted on the highway and diverted through other routes. Meanwhile, clashes broke out at the encounter site between youth and the security forces after which forces used tear smoke shells and aerial firing to disperse the protestors.
Two youth sustained bullet injuries during clashes who were shifted to GMC Anantnag for treatment where the condition of one of the youth was stated as serious. They have been identified as Sahil Yaqoob Bhat of Dantar Anantnag and Shahid Farooq Sheikh of Kulgam.
Sahil has received a bullet injury in lower abdomen and is being operated on at the GMC. His condition is a bit critical. Another injured sustained bullet injury in his thigh and is stable.
Security forces today recovered war like stores and Narcotics in Hajitra Tadd village near the Line of Control in Karnah sector of North Kashmir’s Kupwara district.
Security forces this morning launched a search operation in the area based on a specific input.
During the operation arms, ammunition and Narcotics, which include 15 grenades, 3 detonator, 5 pistols with ammunition and a packet of heroin were recovered.