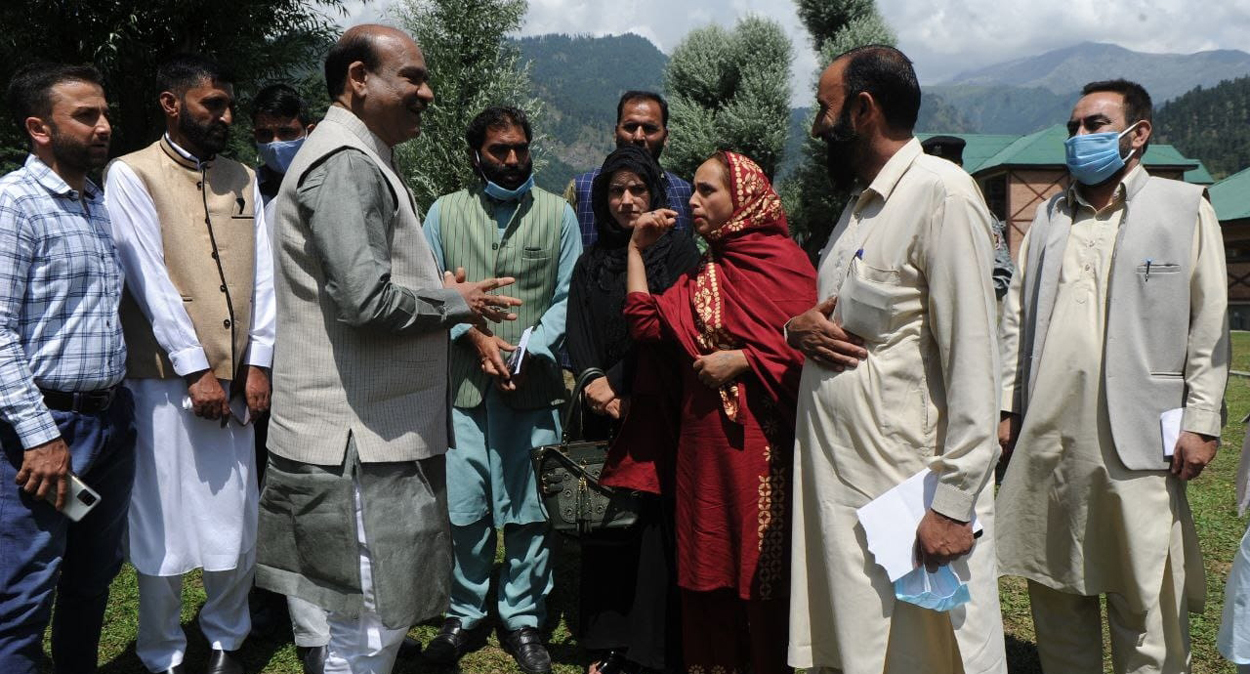 Srinagar, Aug 30: Lok Sabha Speaker Om Birla, today said that decentralisation of power is the key to success of democracy and development and called for greater coordination among administration and Panchayati Raj Institutions.
Speaking at a function in Pahalgam here today where he met the representatives of District Development Council (DDC), Block Development Council (BDC) and Sarpanchs of Panchayati Raj Institutions of Anantnag, the Speaker said that decentralisation of power is key to success of democracy and development.
Birla called for greater coordination among administration and Panchayati Raj Institutions so that the fruits of development reach the intended beneficiaries.
The Speaker stressed the importance of consensus and dialogue and said that all democratic institutions must interact among themselves and they should also device a set of rules and procedures for structured functioning. He said that Gram Sabhas should meet regularly to address people’s issues.
Congratulating the newly elected local representatives, Birla said that the Jammu and Kashmir is on the path of peace and prosperity. The Speaker added that Panchayati Raj Institutions in the UT have been strengthened and appealed to the local representatives for their greater involvement in making the democratic institutions more transparent and accountable.
Observing that the roots of Indian democracy are in our tradition, Birla urged the Panchayati Raj representatives to work towards fulfillment of hopes and aspirations of the people.
Biral said that J&K has tremendous potential for tourism and export and called for measures for boosting marketing and export of local handicrafts and artifacts in national and international markets.
The Panchayat representatives lauded the initiative of Birla for his historic visit and said that the visit of the Lok Sabha Speaker would boost democracy at the grass roots level.
The Lok Sabha Speaker will inaugurate Parliamentary Outreach Programme for the Empowerment of Panchayati Raj Institutions of the Union Territory of Jammu & Kashmir tomorrow.
Besides, Birla, Union Minister of State (IC) for the Ministries of Science and Technology, Earth Sciences, Minister of State, Prime Minister’s Office; Ministry of Personnel, Public Grievances and Pensions; Department of Atomic Energy and Department of Space Dr. Jitendra Singh; Lieutenant Governor of Union Territory of Jammu & Kashmir, Manoj Sinha; Union Minister of State, Prahlad Singh Patel; Members of Parliament, former Deputy Chief Minister of Jammu & Kashmir, Nirmal Kumar Singh and other eminent dignitaries will grace the occasion.
The Parliamentary Outreach Programme for the Empowerment of Panchayati Raj Institutions is a unique initiative of the Lok Sabha Speaker, Om Birla. A first of its kind Programme, it is intended to strengthen the institution of governance and planning at the grass-root level.
This is the fourth such programme across the country organized for the Union Territory of Jammu and Kashmir. The theme of the programme is “Parliamentary Outreach Programme for the Empowerment of the Panchayati Raj Institutions”.
Around 100 Panchayat representatives will physically attend the programme and many others will join online via weblink.
The broad objectives of the Programme include create mass awareness/mass participation, create self confidence/self respect for the ground level leaders, creation of sense of ownership of the assets that have been created, fuelling the ambitions for grass root political leaders for democratic values, creating the awareness about the various schemes and the doorstep delivery – opportunities for development work and opportunity to develop a network and push the aspirational level of the ground level leadership.
Birla will visit Gulmarg to meet the Panchayat representatives on September 1.