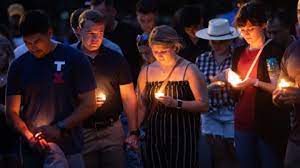 WASHINGTON/HOUSTON, Aug 30: Mourning the loss of 13 American soldiers in a terrorist attack in Kabul last week, Indian Americans held candlelight peace vigils in various cities across the country and urged the Biden administration to ensure that the perpetrators of the act are brought to justice.
A small group of about 20 Indian-Americans gathered at the reflecting pond in front of the US Capitol for a candlelight vigil for US service members killed in the suicide attack at the Kabul airport.
“We have gathered here to mourn the loss of our fallen soldiers in Kabul. This is a heinous act of terrorism. Coming from India, which has been a victim of terrorism, we urge the US government to take strong action against all those involved in terrorism,” community activist Adapa Prasad said.
Candle light vigils were also held in New York, Jersey City, San Francisco, Los Angeles, Atlanta, Houston, Boston, Dallas, Chicago, Ohio Columbus, Connecticut, among others.
“The Indian-American community stands with the families of the fallen soldiers in Afghanistan, who made the supreme sacrifice for the country in the line of duty. They will never be forgotten”, Achalesh Amar, long-time community member and activist, said.
Several people were holding flowers, placards, flags and pictures of the fallen members in Houston, Texas. A few members of the Afghan-American community also joined the vigil.
Local veteran groups have also responded to the passing of Texas fallen soldier David Lee Espinoza. The local chapter of the Veterans of Foreign Wars, whose members have fought in international conflicts like Afghanistan and elsewhere, said they offer their condolences and well wishes to the family during this difficult time.
Texas Governor Greg Abbott on Friday had ordered all flags on state property lowered to half-staff to honor Espinoza, 20, and other military members killed in the Kabul attack. (PTI)