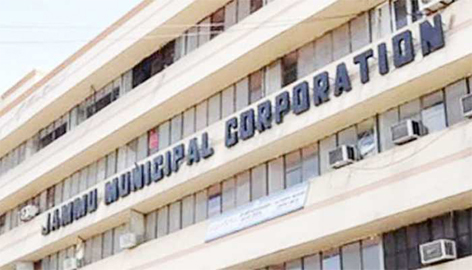 JAMMU, Aug 30: Though the elected Councillors in different Wards of Jammu Municipal Corporation (JMC) have completed about three years of their tenure and the Wards have witnessed certain developments, yet, those representing the four newly formed Wards still claim development deficit arising out of poor funding. The latest development at this juncture is that JMC has now got the powers to run Health Sub Centres, Primary Schools and Anganwadi Centres after 74th Constitutional amendment triggered by the abrogation of Article 370.
It is pertinent to mention here that Wards 72, 73, 74 and 75 are added this time to the already existing 71 Wards of JMC.
“Mine is a more rural Ward where we had streets repaired after more than two decades and most of the area in my Ward is Kuchcha where problem of lanes and drains is as it was earlier (when it was not in JMC jurisdiction),” said Prof. Yudhvir Singh, Councillor Ward 73 (Bhour Camp-Gadigarh area).
He also counted water and power issues as other problems of his Ward and said that dirty water comes in water supply of Jal Shakti Department (JSD) as pipes in the area are about 40 years old and have developed cracks due to rust and decay.
“These pipes pass through Nallah where dirty water mixes with supply water and the problem is mostly in Bhour Camp area,” Prof Singh informed.
He further said that street lights in his Ward have developed technical snags and despite repeatedly informing the matter to the concerned authorities, the repair is awaited.
“The problem of garbage disposal is also on similar lines as dustbins in the Ward are not removed timely and there is only one auto for door-to-door garbage collection in the vast area where thousands of families live,” he maintained.
With similar problems, Ghar Singh, Councillor Ward 75 (Akalpur) claimed that there are five stations of JSD in the area and all are non-functional and the people there are surviving on water by hand-pumps.
He further said that worse is power scenario in his Ward and there are wires hanging on almost dead poles posing threat to the lives of humans and animals.
“Street lights are damaged and none is taking care while stray animal problem is also very severe in the area,” he said adding as the Ward is a newly formed it need more funds which are not given due to which there are more problem in the area which also include miserable condition of drains and lanes.
He said that garbage auto was not paid for months and it has stopped working.
Rashpal, Ward 72 (Shahzadpur) Councillor said improvements are there in his Ward in about last three years where work on lanes-drains and some bridges has begun but water scenario is in very bad condition and people are mostly dependent on hand pumps as JSD is yet to spread its pipe network in the entire Ward.
“Might be due to rural area, authorities are taking time to bring the Ward at par with city areas but still what JMC is giving to other Wards we too are getting but we need more funds,” he maintained.
Bhardwaj said, while the already existing Wards need only up-gradation of already done works, they have work to start works from its very foundation.
Ward 74 (Bhatindi) Councillor, Ch. Sobat Ali said after about three years cleanliness has improved in the Ward though the condition of lanes and drains is yet to improve.
“Garbage disposal is not proper in the Ward and only two autos are given to us while we need four as it is a big and a new Ward,” Ali said.
When contacted JMC Mayor, Chander Mohan Gupta said due attention is being paid for developing the newly created Wards of JMC.
“While in other Wards we have blacktopped one kilometer road, same was done for two kilometers in the new Wards,” he claimed adding that in allotting streetlights too priority was given to the newly formed Wards.
“Streetlights of about Rs one crore were given in the new Wards and still more will be given soon and on other development works too these Wards are on priority,” the JMC Mayor maintained.
He also informed that JMC has given 15 Safai Karamcharis in each of the newly formed Wards and extended Wards.
“The problem is that when JMC was limited to 119 kilometers, the grant was of Rs. 124 crore and today when this limit is extended to 190 kms, the grant of funds is still the same,” Gupta said adding that they have projected a demand of hike in grants to Rs. 500 crore to higher authorities.
He also said that after 74th Constitutional amendment JMC has got some Health Sub Centres, Primary Schools and Anganwadi Centres and the Corporation will work hard to improve these institutions.
“These institutions have been transferred to JMC but so far we have not got any funds for running these which might be allotted in due course of time,” the JMC Mayor said.