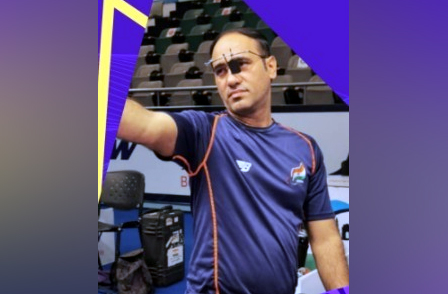 Tokyo [Japan], Aug 31: Indian shooter Singhraj Adana clinched a bronze medal in the P1 – Men’s 10m Air Pistol SH1 final here at Asaka Shooting Range on Tuesday.
This is Indian’s shooting contingent second medal at the Tokyo Paralympics after the 19-year-old Avani Lekhara became the first woman from the country to win a gold medal on Monday. China’s Chao Yang created a Paralympic record with 237.9 points to win silver while another Chinese Xing Huang grabbed silver with 237.5 points.
Singhraj Adana started the better of the two Indians in the final as he was placed in the top 3 during the first 10 shots while amassing 99.6 points. Manish who topped the qualification, had a very jittery start to the final as he gathered 97.2 in the 1st competition stage. In the second stage, he became the second competitor to be eliminated.
Adana meanwhile held his nerves better in the elimination round to see off a scare from the Chinese. Taking his 19th shot Singhraj was dropped out of the medal position after he aimed 9.1 and with the 20th shot of 9.6, he got into the top three as Lou shot a very poor 8.6. In his last two shots, the Indian aimed at 10.0 and 10.0 but it was just not good enough to topple down the top two Chinese pair.
Earlier in the day, Manish and Singhraj qualified for the medal round in the Men’s 10m Air Pistol SH1, here at the Asaka Shooting Range on Tuesday. Manish Narwal amassed 575 -21x points at an average of 9.583 after shooting 60 shots on the target. He finished in the first position in the qualifying round just edging China’s Xiaolong Lou on the number of X’s(575 -15x). Meanwhile, Singhraj Adana gathered 569 -18x to finish 6th in the qualifications. (Agencies)