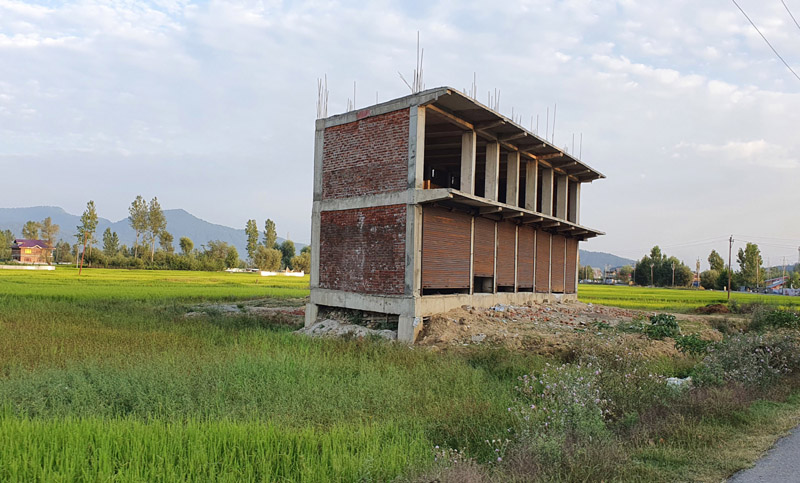 Excelsior Correspondent
Srinagar Aug 31: The Revenue authorities remain unmoved while agricultural land is being damaged along the Baramulla-Kupwara Highway in North Kashmir’s Kupwara District, where unauthorized buildings have ruined paddy fields.
A spate of commercial and residential structures has sprouted along the highway between Sopore and Kupwara at Kulangam and Drugmulla areas, as well as the new Handwara alignment on the Baramulla-Kupwara highway. The constructions are being carried out despite the Government order that agricultural land on which paddy, vegetation or saffron has been planted for two years cannot be used for any purpose without written authorization from the revenue minister.
Few years back, the Government built a 2.5-kilometer road to bypass Handwara Town in order to relieve traffic congestion on the main the route, but unauthorized constructions have damaged the agricultural land flanking the new section of road, and authorities have turned a blind eye to the offenders.
Authorities have also forbidden building activity within 100 metres on both sides of the Handwara Byepass to prevent agriculture vandalism. However, it appears that construction is not slowing down, as many commercial structures have sprouted within the limits.
The locals said that while the administration aimed to prohibit the conversion of agricultural land, it has failed to put a stop to the illegal constructions. “In broad daylight, people are blatantly vandalising agricultural land. How can such massive constructions escape their notice?” a local said, adding that the route is flanked by gorgeous paddy fields, but the area’s attractiveness is being harmed by the construction of these structures.
While acknowledging that unlawful structures had been erected in the area, Tehsildar Dragmula, Shahbaz Ahmad, told Excelsior that the offenders would not be spared, saying: “We will not allow corruption to happen. We have previously registered an FIR in response to one of these complexes. We urge people not to build commercial structures on agricultural land,” he said.