NIT students protest over delay in release of fellowship 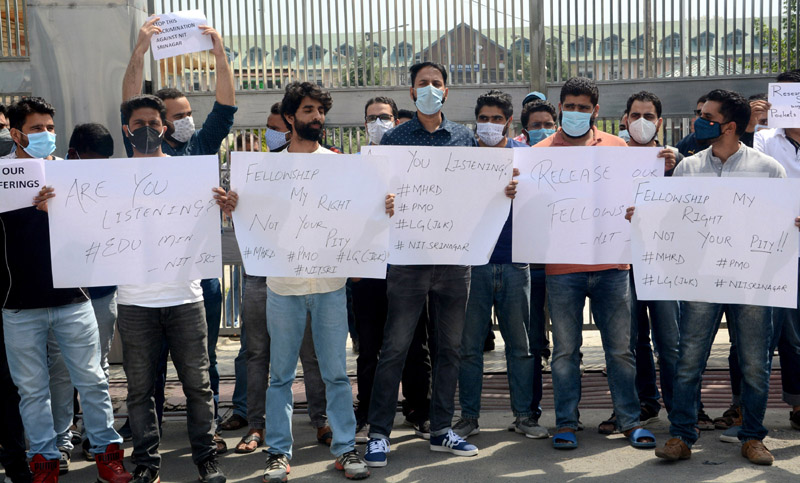 Excelsior Correspondent
SRINAGAR, Aug 31: The PhD. scholars and Masters students at the National Institute of Technology (NIT) Srinagar today protested against the delay in the release of their fellowship, which had been withheld for the last five months.

Click here to watch video
Scores of students gathered outside the NIT’s Srinagar campus and raised slogans in support of their demands. They alleged that the institute had caused them trouble by delaying the distribution of their fellowship for unclear reasons.
“Our fellowship has not been released in five months, and no one seems to care about us. We wrote to the ministry and university officials, but no fellowship has yet been awarded,” a researcher said, adding that the university should create a method for prompt distribution of the fellowship.
According to the scholars, Research and Development (R&D) is the backbone of every nation, and failing to treat them well has a negative impact on the country’s progress. “How can the Aatmanirbhar Bharat project grow under such circumstances if scholars are refused scholarships to which they are entitled under the rules?” a scholar said.
The candidates rued that their financial situation was precarious and that they relied on the institute’s stipend, which they had been denied for several months. “This is causing us pain. The students, who have arrived from the outside and are living in rented accommodation, are unable to pay their monthly rent. We knocked on every door in the institute. However, nothing has been done so far,” another scholar said.
According to the Masters students, they are eligible for a monthly allowance under the MHRD’s Post Graduate Scholarship Scheme for full-time GATE-approved students, but the payment has been delayed for several months, “We rely on the allowance for our monthly needs and are having difficulty paying the semester enrolment fees without the institute’s financial support,” a student explained.
Earlier, an official told Excelsior that the scholars’ fellowships had been delayed since May due to a reduction in Government funding. “We have raised the issue with the government and requested extra funding from the Ministry of Education,” he said.