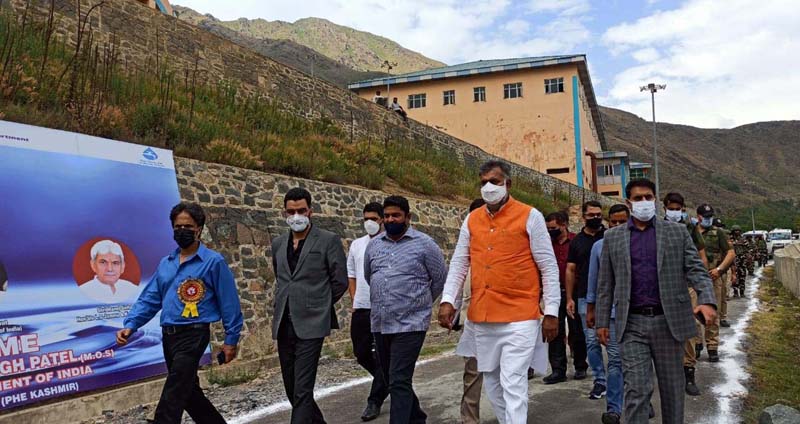 Excelsior Correspondent
SRINAGAR, Aug 31: Continuing public outreach during the second day of his visit to Kashmir, Union Minister of State for Jal Shakti & Food Processing Industries, Prahlad Singh Patel today held an interactive session with Panchayat representatives and Paani Samiti members at Pantha Chowk to discuss the status of Jal Jeevan Mission in their respective areas.
During his interaction, the Minister observed that the role and responsibility of Panchayat representatives will increase as the schemes and plans of the Government are being implemented at fast pace.
While giving the example of Jal Jeevan Mission, he said that such schemes are being executed while keeping future in mind so that the next generation would take pride at the facilities which would be at their disposal during their time.
He urged people to actively participate in all the developmental activities so that better facilities could be provided to them.
While congratulating the J&K administration for providing tap water to large population in the region, he expressed his hope that the UT administration’s target of 100 percent tap water for every household till 2022 will be achieved in set timeline.
On the occasion, the Minister also visited 10 Million Gallons per Day (10 MGD) Tangnar Water Supply Scheme, Pantha Chowk here and inspected the functioning of the filtration plant.
He inspected different sections including Alum Tanks, Chlorination unit, and water testing laboratories at the water filtration plant.
On the occasion, the Minister was informed that the plant supplies potable water to several Srinagar and Budgam areas and the filtration plant is equipped with the latest VT (vertical) pumps to lift water upwards from Jhelum, and also consists of a service reservoir.
During his tour, the Minister was accompanied by Commissioner Secretary Jal Shakti Department, M Raju; Deputy Commissioner Srinagar, Muhammad Ajaz Asad; Mission Director Jal Jeevan Mission, Dr Syed Abid Rasheed Shah; Chief Engineer PHE Kashmir, Iftikhar Ahmad and other concerned.
The Minister also visited Food Testing Laboratory Srinagar where he inspected testing and analysis sections and also interacted with the staff there.
Earlier, the Minister paid obeisance at Zeastha Devi Temple, Shankaracharya Temple and Shital Nath Mandir where he prayed for happiness, prosperity and well-being of all.