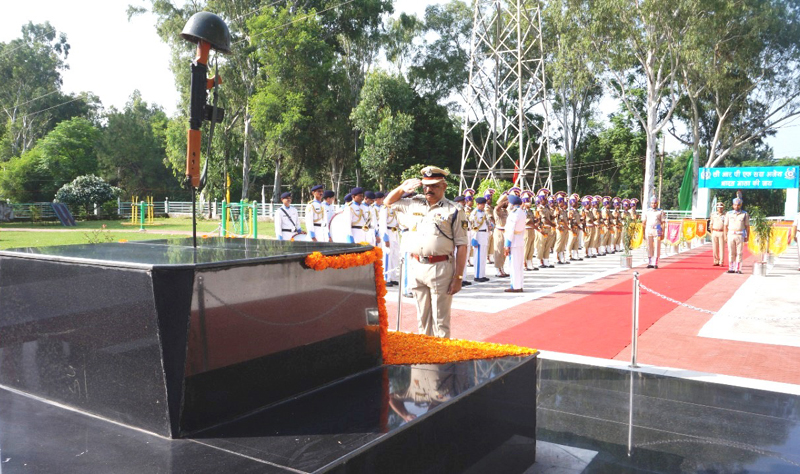 JAMMU, Sept 1: Group Centre CRPF Jammu celebrated its 54th Raising day with great pomp and show at Ban Talab here today.
The chief guest, Bhanu Pratap Singh, DIG paid tributes at “Shaheed Smarak” to all the martyrs who made supreme sacrifice while discharging their duties. After that, the chief guest took salute at Quarter Guard and made a special entry in visitor’s book.
Later, DIG addressed “Sainik Sammelan”, in which Gazetted officers, subordinate officers and jawans were present. In his address, he welcomed and congratulated everyone for raising day and described about golden history of Group Centre Jammu and said that this Group Centre was raised on September 01, 1968 under command of Lt Col Shiv Charan Das.
Primarily the GC office was established at Talab Tillo (Deewan Kothhi), Jammu, which was shifted to this campus in 1972.
He also shared information about the day by day growing responsibilities of CRPF in and outside the country and called upon everyone to move forward with the past 53 years of realization and a new resolution.
On raising day sports competition and a colourful cultural programme was organized. In cultural programme patriotic songs, dance and melodious music were presented by jawans which captivated everyone.
The magical performance in the programme mesmerized the whole audience. At the end of the programme, the chief guest praised all the artists who presented the wonderful programme. Simultaneously a combined “Bada-Khana” was organized for all.
The programme was organized under the leadership of BP Singh, in which PC Gupta, Commandant, Rajesh Kumar, Dy Comdt, Sumit Verma, DyComdt and other Gazetted officers, Subordinate officers and jawans were present.