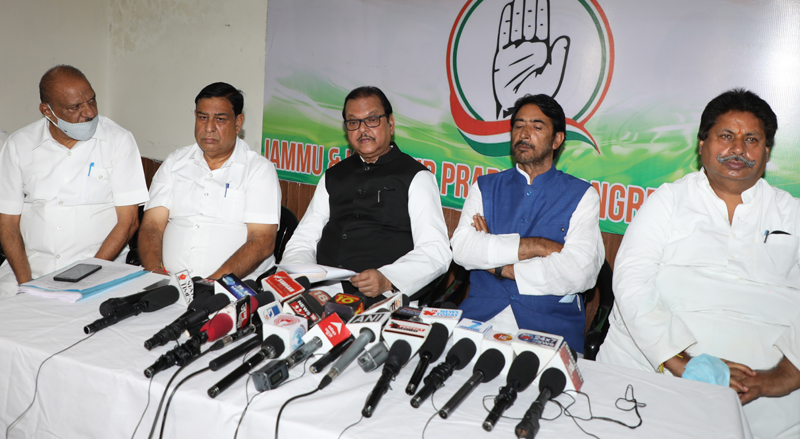 JAMMU, Sept 1:  Former Union Minister and senior All India Congress leader Subodh Kant Sahai  has said that BJP Govt has put the national assets on grand sale through National Monetization Pipeline (NMP), which he described as “Modi Mudra Pipeline Scheme”, stating that this will have grave negative consequences for the nation.

Addressing a press conference at Congress office Jammu today along with  JKPCC president GA Mir and other senior leaders including former ministers- Mula Ram, Raman Bhalla and Yogesh Sawhney, Sahai said that the Government which can not manage key sectors like ports, airports, solar power, telecom, natural gas pipeline, petroleum pipeline and warehousing etc has no roght to remain in power.
Asserting that a big lie has been exposed, the former minister said  that the Prime Minister, Narendra Modi and his ministers have vociferously  denounced  the Congress Govt and all other previous Governments , including, ironically, Atal Behari Vajpayee Govt for doing nothing and building nothing for 70 years, as  if India had attained Independence only in May 2014. However, on August 23, 2021 when the Finance Minister released a list of assets  that were proposed to be monetized, she failed to disclose when those assets were built.
Sahai raised serious  question on the process and manner in which Modi Govt operates reflecting it as a conspiratorial manner, as there were no discussions in the Parliament, there was no draft paper on NMP, there were no consultations with the stake holders, especially the employees and trade unions and the policy was hacked in secrecy and announced suddenly.
Referring  the long list of assets proposed to be monetized by the Central Govt,  the senior Congress leaders said that by a stroke of pen, Modi and his Finance Minister have threatened to reduce India’s Public Sector assets to near zero. They claimed that the Govt will collect a rent of Rs 1.50,000 crore per year  and hold on to a piece of paper that it is the owner of the assets. They also boost that the assets will return to the Govt at the end of the transfer period.
Pointing out glaring  absence of criteria in the collection of PSUs brought  under the NMP, he said that the annual revenue currently being yielded by the chosen assets, has not been disclosed, there is no clarity  on jobs and reservations, whether the present number of jobs in the monetized units will be maintained and eventually enhanced? Will reservation of SC, ST and OBCs be maintained or abolished?” he questioned.
The former Minister said that the policy of disinvestment and privatization has evolved over the years since 1991 but certain criteria was also set for  choosing the units to be privatized . Among them were    PSUs in a strategic sector will not be privatized,     Cronically loss – making units could be privatized,  a PSU having a minimal market share for its products could be  privatized,    a PSU will be privatized if it will promote competition; it will not be privatized if it may lead to a monopoly.
JKPCC chief spokesperson, Ravinder Sharma and general secretary, Manmohan Singh were also present.

Facebook
Twitter
Pinterest
WhatsApp
Previous articleLocal representatives should have say in Legislative process: Birla
Next articleReach out to Start-Ups instead of they reaching you: Dr Jitendra