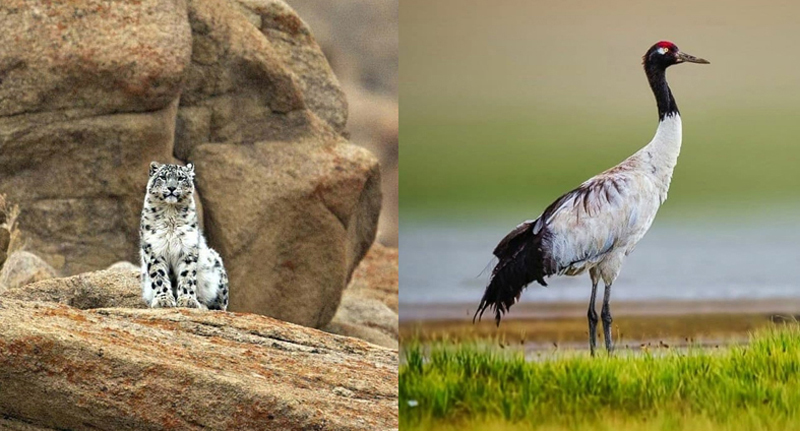 LEH, Sept 1: The Government of Ladakh has declared snow leopard its state animal and black-necked crane state bird.
A notification in this regard was issued Tuesday by the Principal Secretary Forest, Ecology and Environment, Pawan Kotwal.
“The Lieutenant Governor of Union Territory of Ladakh is pleased to declare snow leopard (Panther unica) and black–necked crane (Grus nicricollis) as State animal and State bird, respectively, of the Union Territory of Ladakh from the date of issue of this notification,” Kotwal said in a notification.
Meanwhile, the erstwhile Jammu and Kashmir had the black-necked crane and Kashmir stag (Hangul) as its State bird and animal respectively.
The officials point out that both species are rare and had been symbols of the state for a long time.
While the black-necked crane is found in Eastern Ladakh, Hangul is in Kashmir.
Following the bifurcation into separate administrative divisions, the black-necked crane could no longer be the state bird for the UT of Jammu and Kashmir, and the Hangul could no longer be the state animal of Ladakh, they said.
Experts put the population of snow leopards to be between 200-300 individuals in Ladakh alone and speak about the fragile relation of their healthy population to overall natural health of the mountains. Meanwhile, the black-necked crane found only in Eastern Ladakh’s high-altitude wetlands and marshes and is listed as Near Threatened on the IUCN red list.
The birds arrive here as early as March for breeding and leave by October end or early November.
Their habitat loss could lead to the extinction of this species, at least from this region.
Excelsior in its edition dated May 2, 2021 had exclusively reported that UTs of J&K and Ladakh have failed to identify new State Bird and Animal since 2019. Though Ladakh has completed the exercise, J&K UT’s yet to act in this regard.