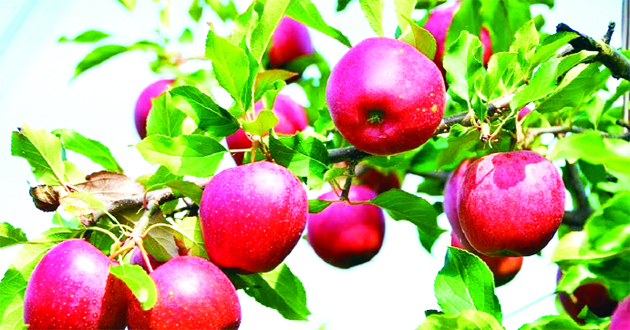 Digvijay Gupta
Bani is a small glaciated valley about 153 Kms from Kathua and 233 Kms from Jammu respectively. It is a tehsil of district Kathua having a population of 30 to 40 thousand and has two blocks i.e Bani and Duggan. Bani block has 17 Panchayats and Duggan has 12 Panchayats. Besides being breathtakingly beautiful, it is also home to a number of fruits like apple, walnut, pear, apricot, peach, plum and citrus. But the people of this area face numerous problems with regard to marketing of this fruit, and other allied problems.
In order to assess the situation, officers of Horticulture Department visited the area sometime back. They interacted with the farmers to know the problems they face, and suggested ways to encounter them.
The team was accompanied by Maritech Collaborates’ members who are technically supporting the farmers in respect of marketing of their produce. They also market the produce under Ceres-AG, a company whose advisors are directors of Adani Group (Horticulture Wing).
Main problems of farmers which came to the fore are:
Marketing of the produce: Farmers were of the view that there is scattered production of apple and walnut and it is on the higher reaches of the Bani and Duggan area. The pre-harvest contractors cannot reach there to buy the product. The farmers load their produce in bags and transport it on mules. So, most of the produce gets damaged in transportation.
Weevil attack on walnuts: Pre-mature walnut drop is happening due to the attack of walnut weevil in the area. Thus, the walnut production is getting lower by the day.
No collection center at Bani: The farmers are facing a big problem in transportation and collection of fruit for selling it onwards. There was a demand to construct the Apni Mandi in Bani at the earliest for this reason.
Monkey Menace: There are at least 2000 monkeys who destroy the crop.
Neglected area: As the higher reaches of Bani have been neglected due to the far-flung area, the orchardists have constructed their houses in lower area of Basoli, Bilawar and Kathua neglecting the marketing of their produce.
Transport: As the roads to Duggan and other areas are very narrow, there is no provision of trucks or buses to ply there. Only small vehicles like matador can carry the goods and passengers making it difficult for the farmers to transport their produce.
Solutions
The officers of the department suggested that upcoming Apni Mandi, Bani will be constructed soon. The crate work is complete, and they will request the authorities to construct a platform to be used as collection centre.
Also, an Apple Integrated Cold Chain Project (Flair Agritech Pvt. Ltd.) is being constructed at Ghatti, Kathua with a project cost of 2000 lacs which will be a boon for the farmers of Bani Area whose product will be sold and marketed by this chain in the next season i.e., 2022-23. Its storage capacity is 2500 MTs.
As for as monkey menace is concerned, the officers from Horticulture Production Department guided the farmers to purchase the “Sound Gun” which has been proven very useful to repel the monkeys. It costs around 5 thousand and a subsidy will also be provided by the department. The farmers will provide a list to the Horticulture Department who are ready to purchase the gun.
Walnut weevil attack is destroying the walnut crop as there is shriveling and premature felling of fruits. For this, the Horticulture Production Department is requested to take up an integrated pest control for the same.
As far as the subject of areas being neglected due to higher terrains is concerned, the department officials provided the farmers with the mobile numbers of all entrepreneurs, number of Horticulture (P&M) and Horticulture officers so that the farmers can contact at any time.
No doubt there are narrow roads of Duggan and other areas, but the roads are being widened and the work is in progress. Hopefully the problem of transportation will be solved by widening of roads.
The author is Joint Director Horticulture (P&M)