Ladakh gets Organic Farmer Facilitation Centers in both districts 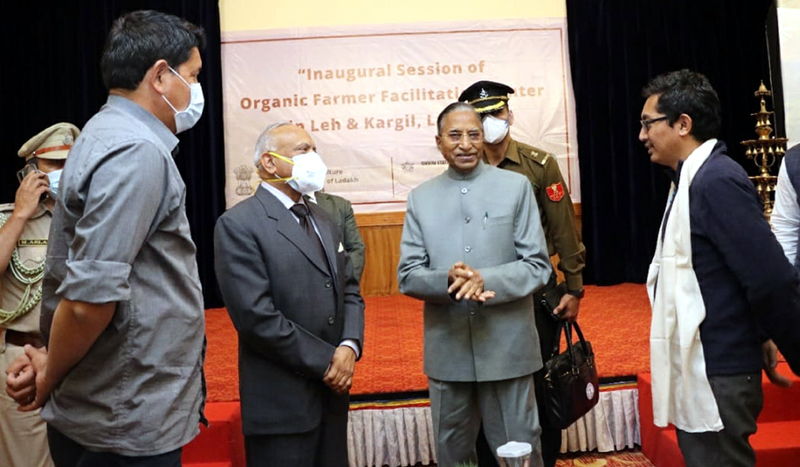 Excelsior Correspondent
LEH, Sept 4: In Ladakh’s endeavour to become a certified organic UT by the year 2025, two Organic Farmer Facilitation Centers, one each at Leh and Kargil were inaugurated by Governor,Sikkim,Ganga Prasad in presence of Lieutenant Governor, UT Ladakh RK Mathur at an event organized jointly by Department of Agriculture, UT Ladakh, and Sikkim State Organic Certification Agency (SSOCA), Government of Sikkim today.

Click here to watch video
Addressing the inaugural event, the Governor of Sikkim Ganga Prasad Chaurasia lauded Ladakh’s vision to embrace organic farming and assured all possible support in this field. He also spoke of the great potential in the organic market and stated that Ladakh has a convenient approach to Delhi with direct flight services available. Realising the benefits of developing as an organic state, the people of Sikkim are fully sensitized and are taking all possible steps to contribute, stated the Governor.
LG, UT Ladakh, RK Mathur expressed gratitude to SSOCA for their co-operation and urged the agency’s continued support to UT Administration in achieving the vision as per the Prime Minister’s mantra of Carbon Neutrality. The Mission Organic Development Initiative is one of the firsts in this direction.
LG stated that with ongoing climate change world over, becoming Carbon Neutral is not a choice but a necessity. Further, he stressed the need for commercial-scale of production with the help of innovative technologies such as lift irrigation system to bring maximum benefits to the farmers and generate employment opportunities to the youth.
Cluster villages of Igoo, Shara, Chamshen, Partapur, and Skampuk have been awarded Participatory Guarantee System (PGS) Green certification, completing the first phase of certification. Two more phases will be completed over the next two years.
CEC LAHDC Leh, Tashi Gyalson stressed the need for exploring sustainable projects in the agricultural sector of Ladakh. He also requested the scientific community and the UT Administration to recommend feasible schemes and initiatives to be introduced in the Changthang sub-division via the agricultural department to generate a new source of livelihood for the region.
MP Ladakh, Jamyang Tsering Namgyal stated that Ladakh was facing challenges due to lack of adequate funds and resources to form such policies before becoming Union Territory. He highlighted that it was LAHDC that worked on the formation of an organic mission policy in the year 2018 to make Ladakh self-sustainable and fully organic in the future like it was before introducing and experimenting with modern technologies in the region. He stressed the need for implementing Prime Minister, Narendra Modi’s initiative of having ‘Vocal for Local’ in this mission towards making Ladakh an Organic state in the country after Sikkim.
Director,DIHAR,OP Chaurasia, Mission Director/ Agriculture Officer,Tashi Tsetan, officers and officials from SSOCA, Agriculture Departments of Leh & Kargil were also present at the event.