Parl Panel on IT meets LG 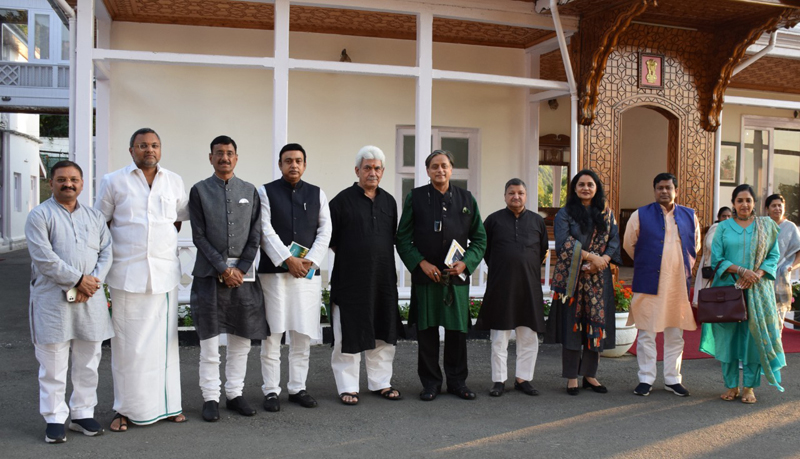 Chairman Tharoor calls on Abdullahs too

JAMMU, Sept 4: The Parliamentary Standing Committee on Information Technology (IT) today called on Lieutenant Governor Manoj Sinha in Srinagar while Panel Chairman and veteran Congress leader Shashi Tharoor separately met former Chief Ministers and National Conference leaders Dr Farooq Abdullah and Omar Abdullah at their residence.
The Committee members met Sinha in Raj Bhavan and discussed with him the scenario in Jammu and Kashmir regarding the Information Technology in the Union Territory.
While no official statement was issued by the Union Territory Government or the Committee on meeting the Parliamentarians had with the Lieutenant Governor, sources said they discussed various aspects.
They said the Lieutenant Governor is understood to have briefed the Parliamentary Committee.
“Met members of the Parliamentary Standing Committee on Information Technology led by its chairperson and Member Parliament Dr Shashi Tharoor,” a tweet by the Office of LG J&K said.

The Parliamentary Committee on Information Technology is also scheduled to meet various other stakeholders during their visit.
Meanwhile, Tharoor also called on former Chief Ministers and NC leaders Dr Farooq Abdullah and Omar Abdullah at their residence in Srinagar.
“Chairman of the Parliamentary Committee on IT Shashi Tharoor called on his Lok Sabha colleague and JKNC president Dr Farooq Abdullah this evening,” a tweet by Omar Abdullah said.
“It was a good seeing you @Shashi Tharoor, I look forward to continuing our conversation in Delhi one of these days soon,” Omar said in another tweet.
It may be mentioned here that Parliamentary Standing Committee on Home Affairs chairman and veteran Congress leader Anand Sharma during the Panel’s week-long visit to the Union Territories of Ladakh and Jammu and Kashmir had also called on Dr Farooq Abdullah and Omar Abdullah in Srinagar.
Nearly 15 Parliamentary Committees have so far visited the UTs of J&K and Ladakh during past over 20 days while more Panels are likely to tour the UTs shortly.