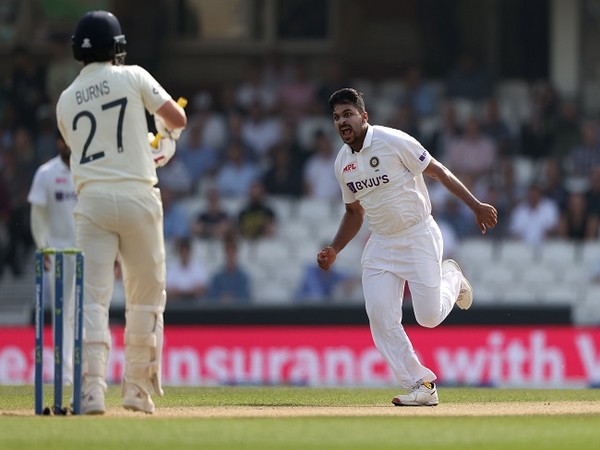 London [UK], Sept 6: In what is panning out to be a fascinating day of Test cricket, India took the honours in the first session of the fifth morning in the fourth Test at the Kennington Oval on Monday as the visitors picked two England wickets to peg the hosts back in their second innings.
Shardul Thakur removed Rory Burns before Dawid Malan ended up being run out in what was clearly an intense session with both teams giving it their all. At lunch, England’s score read 131/2 — still needing 237 runs to win in the last two sessions of the match with eight wickets in the bag. England scored 54 runs for the loss of two wickets in the first session.
If Haseeb Hameed showed resistance for England, Shardul showcased resolve as he provided the breakthrough for India dismissing Burns in the first hour of play.
Taking strike on the final morning, the England openers got off to a steady start and both completed their respective fifties. However, moments after Burns brought up his half-century and a 100-run stand with Hameed, Shardul removed him to hand England the first blow.
Meanwhile, Hameed also brought up his fifty. It was his second fifty in the series and his fourth in the longest format of the game. Dawid Malan, who came into bat at three, failed to leave a mark as he fell short at the striker’s end and got run out after scoring five runs. It was Hameed’s fault as he misjudged the quick single and Malan paid the price as Rishabh Pant made no mistake in removing the bails.
England skipper Joe Root and Hameed then added 11 runs before the first session came to an end. On Sunday, openers Hameed and Burns had provided England with a solid start in the final session after India were bowled out for 466 in the second innings.
Brief Scores: India 191 and 466 all out (Rohit Sharma 127, Cheteshwar Pujara 61; Chris Woakes 3-83); England 290 and 131/2 (Haseeb Hameed 62*, Rory Burns 50; Shardul Thakur 1-15). (Agencies)