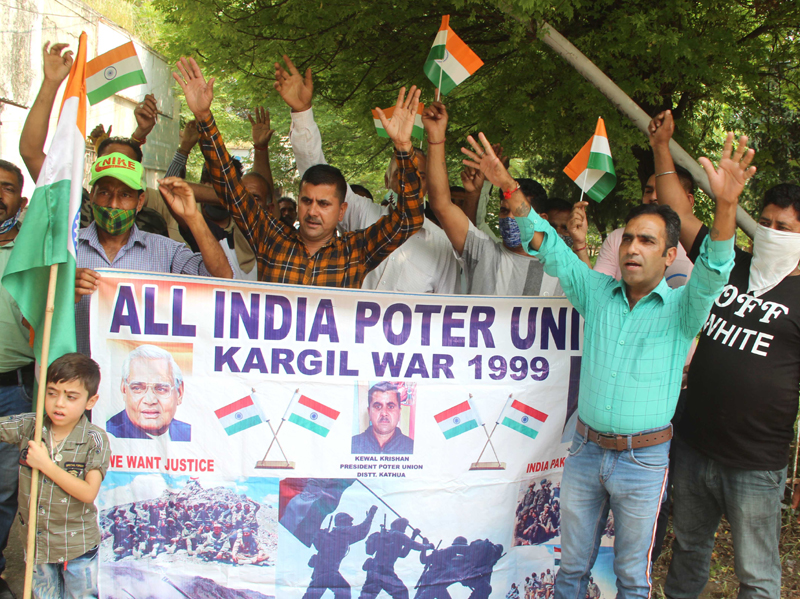 JAMMU, Sept 5: All India Porters Union (Kargil War) members from Akhnoor, Samba, Kathua, Jammu and Pathankot /Himachal area held protest demonstration near Press Club in Jammu today.
A large number of members of the Union from various villages of districts Kathua, Samba and Jammu besides parts of Pathankot and Himachal, led by Romesh Kumar (president) assembled near Press Club of Jammu today and started protest demonstration. They were demanding their absorption in Army and Para-military forces. They were carrying banner and nationals flags in hands and projecting their demands.
Romesh Kumar later talking to media-persons said that they were taken in the Army as porters during Kargil war with the assurance that they will be given preference in Military and Para-military forces recruitment besides other recruitments. They were also assured special recruitment then. They served with the Army under very tough and adverse conditions in Kargil and after the war came to an end, they were just thrown out. Many of them have gone over aged.
Many times they cleared screening tests for Army but could not get opportunity to get recruited in Army and paramilitary forces. They carried army ration and other equipment to the heights of Tiger hills and other mountain peaks of Kargil during war with Pakistan in 1999. About ten porters also lost their lives during this war. But unfortunately, no policy was framed for their absorption by the Government.
The Government must frame policy for rehabilitation and employment of the porters. Not only but their families are also suffering. They said that for the last 15-16 years porters are struggling for their survival but no one in the Government is listening to them. If the Government only believes in the policy of “use and throw’, then no youth will come forward at the time of crisis. The Centre and State Governments and the higher Army authorities have shown indifferent attitude towards this labour force, president said. Other members- Swarn Kumar and Ghara Ram also spoke on the occasion.