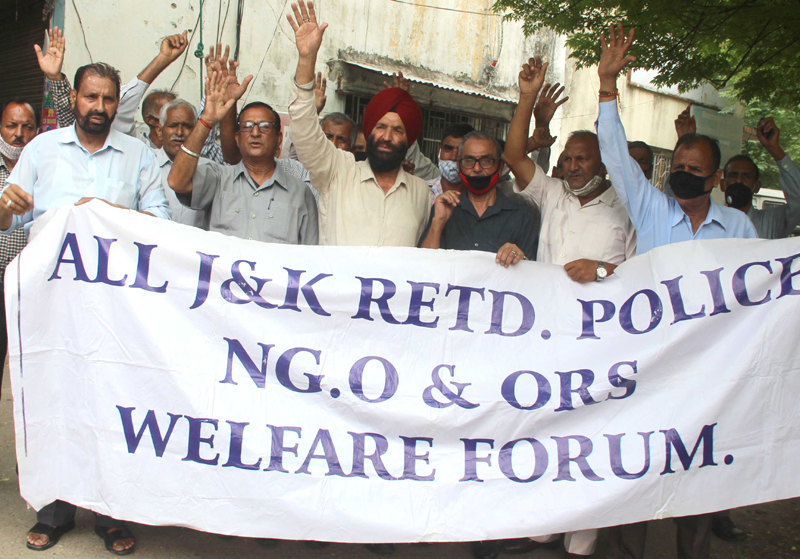 JAMMU, Sept 5: Non-Gazetted Police Pensioners Welfare Forum today held a protest demonstration here at Exhibition Ground to press the Government to fulfill their long pending demand regarding pay anomaly.
A large number of retired non-gazetted police personnel under the leadership Ajit Singh gathered at Exhibition Ground and started raised slogans against the Government for ignoring their long pending demand regarding pay anomalies.
Addressing the protestors, Ajit Singh said that Government is giving the effect of its Order No 229-F of 2014 dated 7-10-2014 regarding pay anomaly, from the date of order though the effect should be given from the year 1996 when fifth Pay Commission was implemented throughout the State leaving only police department.
He criticized the Government and the Police Department for ignoring the just and genuine demand of the poor police pensioners, stating that since the Forum launched their struggle to get their rights, Government is constituting committee after committee but doing nothing to redress the issue and in the meantime many retired police personnel have expired.
Singh also reiterated other demands of the Forum which include enhancement of the medical allowance from Rs 300 to Rs 1000 per month and 10 percent reservation for their wards in professional colleges and recruitment in police force.
He said that Government has issued two circulars in the year 2017 and 2018 while directing the Station House Officers to listened to the grievances of the retired police personnel in their jurisdiction and address their issues but no SHO bothered much and the purpose of these circulars was defeated. Further issuing other circulars, the SHOs concerned were advised to attend the last rites of the deceased retirees but this is also not being followed.