Family of 7 rendered homeless as houseboat sinks in Jhelum 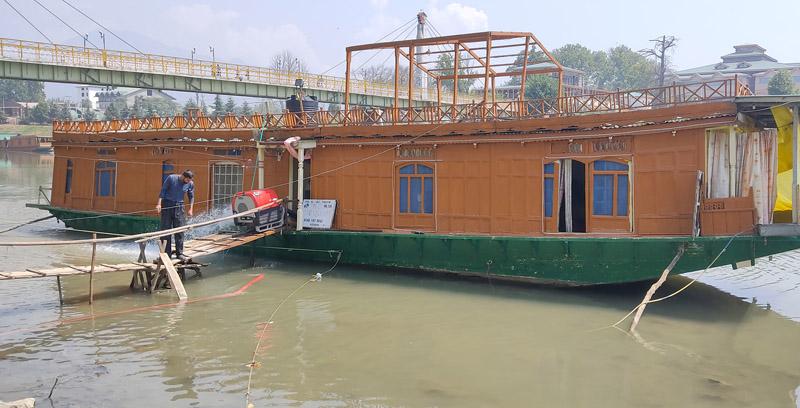 Srinagar, Sept 6: A family of 7 was today rendered homeless after the houseboat they were living in sank in the river Jhelum after its suffered damage.
As per the relatives of the family, water entered the houseboat ‘New Sulaiman’ belonging to Ali Muhammad Shagoo early in the morning, prompting the locals to bring the family members out of it.

Click here to watch video
“Everyone was sleeping when they noticed that water was entering the houseboat and was about to sink along with the family members; as they woke up they called for help and then we took them out with the help of the teams of SDRF,” a relative of the family said.
As per the eye-witnesses, the family was not able to get out their valuables and could only get themselves to the safer place. “There was furniture along with other valuables which were damaged due to the water; there is an estimated loss of over 3 lakh rupees to the family,” they said.
Earlier, there was also a similar incident reported where a houseboat anchored adjacent to the houseboat ‘New Sulaiman,’ which also sank into the Jhelum after suffering damages in the base of the houseboat.
The owners of the houseboat along with their relatives have asked for immediate help so that the houseboat is repaired and the family which has been rendered homeless is rehabilitated.
“There were around 4 rooms in the houseboats, 2 rooms were used by the family while as they used to earn their livelihood by accommodating tourists in the rest of the rooms; now, it is all gone and the family is in dire need of financial assistance from the authorities,” the relatives said.