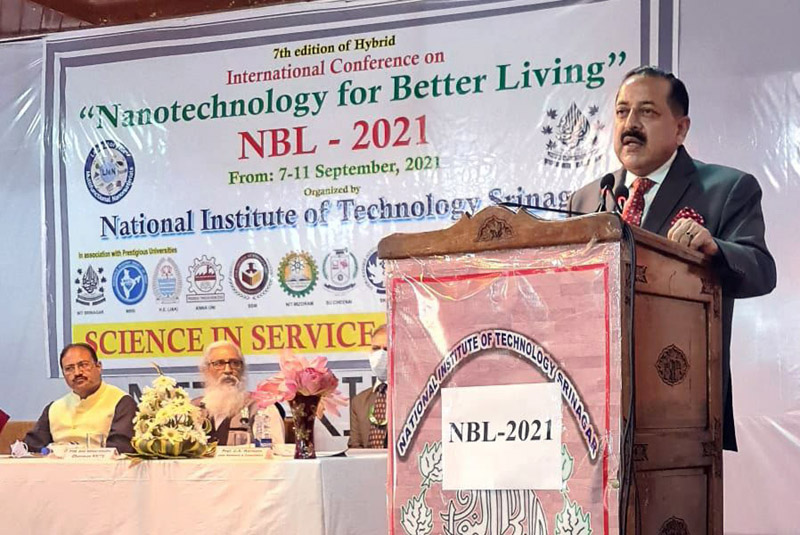 Click here to watch video
This is the 7th Edition of the Conference and is being held under the aegis of Materials Research Society of India in association with Anna University, SKUAST-K, NIT Mizoram, SSM College of Engineering, IIT Madras, SKIMS, M G University Kerela, and in collaboration with Nanoscale Research Facility (NRF), IIT Delhi. The Conference will be held in hybrid mode and around 300 participants from outside will take part in it.
Addressing the participants at the event, Dr Jitendra Singh said that India has taken a giant leap forward in the field of science under the guidance of Prime Minister Narendra Modi. He said that India always had superlative scientific temperament but there was lack of desire to implement it in the past but the gap has now been filled.
Commenting on the progress made by India in the recent years, the Minister said that the present dispensation has removed taboos and opened up the field to private players and start-ups. He said that the atomic energy field was shut behind a veil of secrecy and it was only PM Modi who gave the permission to expand India’s nuclear programme.
The Minister also emphasised the need to groom young and emerging scientists and tap scientific potential and temperament at an early age. He made a mention of an 11-year-old Indian-American girl who has been honoured as “America’s top young scientist” for inventing a quick, low-cost test to detect lead-contaminated water using carbon nano-tubes”.
He said that in recent years, nanotechnology-based drug delivery systems have been applied to intranasal drug delivery to overcome various limitations that occur during mucosal administration, and advances have been made to the stage where effective drug delivery is possible. He added that the use of non-toxic antiviral nanoparticles has been developed for clinical applications to prevent and treat Covid-19.
Dr Anil Sahasrabudhe, Chairman All India Council for Technical Education, who was Guest of Honour on the occasion said that nanotechnology was known to Indians for thousands of years. He said that nano science has utility in many braches of science and the quantum of research being done on the subject has increased manifold in the recent past.
On the occasion, Director NIT Srinagar, Prof Rakesh Sehgal briefed Minister
about history of NIT Srinagar and programs that the institution is offering in different academic fields. Prof Sehgal also urged the honorable minister to assist and facilitate NIT Srinagar in establishing centre of excellence on Advance Material for Multi-functional Applications to achieve Make in India vision of PM Modi.
Registrar NIT Prof. Kaiser Bukhari said the international conference will be a platform for young researchers of the Institute and other participants from across the globe. He also presented a vote of thanks to Dr. Jitendra Singh for accepting the NIT’s request.
Convener of Conference and HOD Physics, Dr. M. A. Shah delivered his lecture on Glimpses of 7th Edition of Biennial International Conference on Nanotechnology for Better Living, highlighting its journey and importance for the region.

Facebook
Twitter
Pinterest
WhatsApp
Previous articleAfghanistan: the warlords who will decide whether civil war is likely
Next articleBJP general secretary and former MLC , Vibodh Gupta during tour of border belt in Rajouri on Tuesday.