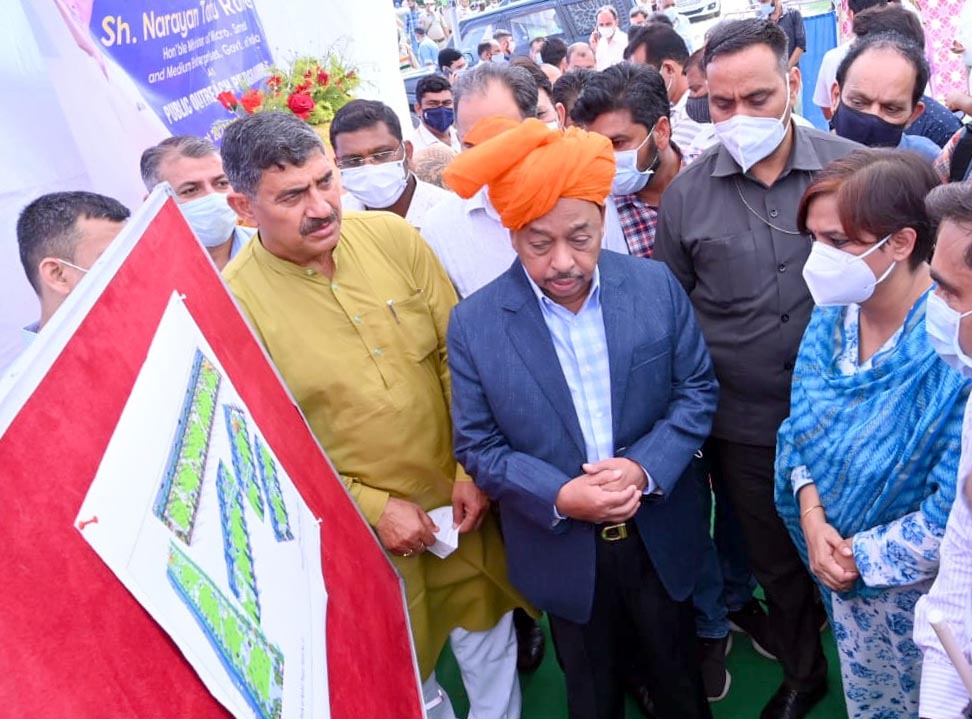 Interacts with entrepreneur’s delegations, PRIs, takes stock of their issues

JAMMU, Sept 16: As part of public outreach program launched by the Central Government, Minister for Micro, Small and Medium Enterprises (MSME), Shri Narayan Tatu Rane laid foundation stone for development park today besides interacting with delegations of entrepreneurs and PRIs at Bari Brahmana, Samba.
On the occasion, Union Minister Shri Narayan Tatu Rane said that the central government is committed to provide enhanced basic facilities to the people at their doorsteps. He asked for maintaining a strong coordination between the administration and the people for effective implementation of various welfare and development programs launched by the government.
Later, the Minister held a meeting with all stakeholders along with senior functionaries of concerned departments to assess the development scenario of the area.
During the meeting, the Union Minister interacted with various delegations of industrials, local bodies’ representatives and PRIs and listened to their issues and concerns. The Minister assured the central government under the leadership of Prime Minister, Shri Narendra Modi, is determined to resolve all genuine public issues and people of Jammu and Kashmir are getting focused attention. He also sought details from department of Industries and Commerce regarding the working of small scale industry, steps to be taken for upliftment of these ventures and generating employment opportunity for local youths.
The Minister also issued on the spot directions to the concerned authorities for redressal of some of the issues at an earliest.
He urged upon unemployed youth of JKUT to take full benefit of various employment generation centrally sponsored schemes launched by the union government.
Member of Parliament, Jugal Kishore Sharma; District Development Council Chairman, Keshav Dutt Sharma; Deputy Commissioner, Samba, Anuradha Gupta; Director, Local Bodies, Asgar Hussain; Vice President, Municipal Corporation, Bari Barahmana besides representatives of PRIs and Municipal Corporation were present during the inaugural function.