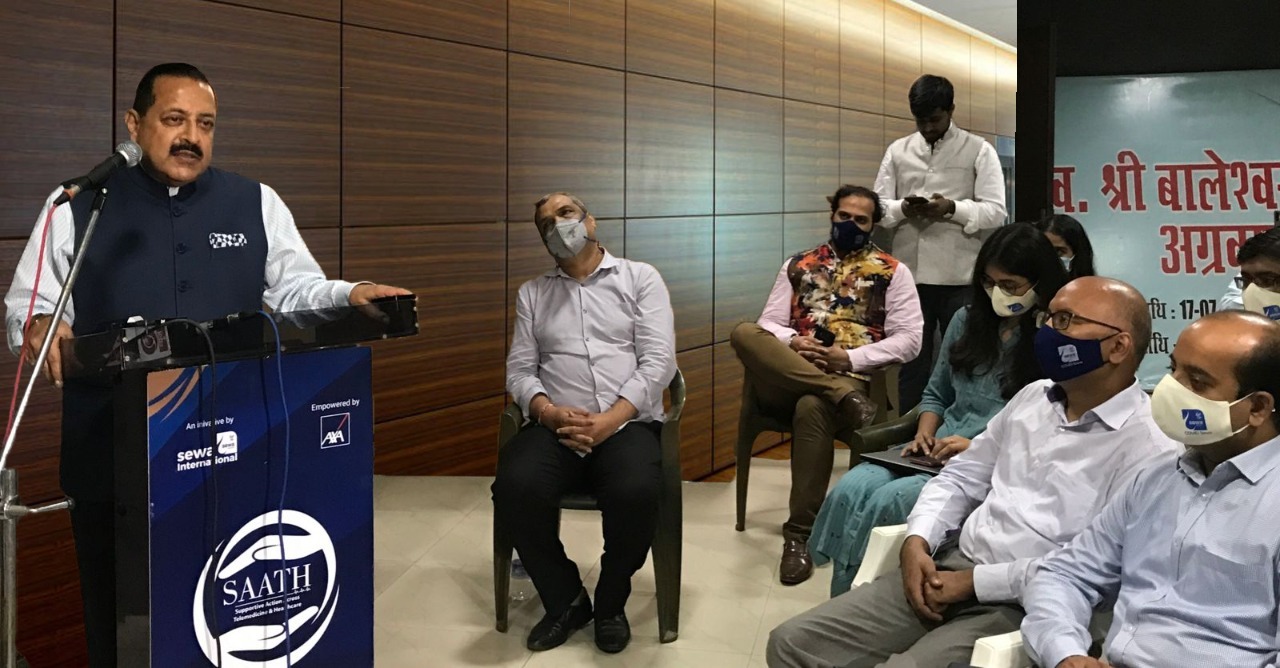 NEW DELHI, Sept 17 : To mark “Seva Samarpan Abhiyaan” on the occasion of the birthday of Prime Minister Narendra Modi today, Union Minister of State (Independent Charge) Science & Technology; Minister of State (Independent Charge) Earth Sciences; MoS PMO, Personnel, Public Grievances, Pensions, Atomic Energy and Space, Dr Jitendra Singh launched countrywide free Telemedicine Consultation cum drugs facility, which is perhaps unique of its kind.
The Minister also announced that “JIGYASA”, a student- scientist connect programme of the Ministry of Science & Technology will be extended to cover schools in over 700 districts of India within one year. The programme jointly executed with Kendriya Vidyalaya Sangathan is currently operational in 170 districts of the country.
Speaking on the occasion, Dr Jitendra Singh said, on a day when the whole nation is celebrating the birthday of Prime Minister Narendra Modi, there could not be a better way than this to observe “Seva Samarpan Abhiyaan”, since both “Sewa” and “Science’ are inspired by Modi.
Dr Jitendra Singh said, a countrywide free telemedicine facility will overcome the problems of Accessibility, Availability and Affordability. He said, all three obstacles like quality of services, doctors and assistance, distance of traveling and cost of consultation/treatment are targeted and solved efficiently through this facility. He also added that Telemedicine services like SAATH and E-Sanjeevani add a meta-layer to the primary health sector, thus helping upgrade the entire health care system of India.
The Minister said, Telemedicine will not only help the patients save their time and money, but also the doctors who can quickly assist their patients over a call for the same and actively engage in promptly treating patients with major ailments. To make this possible, the majority of the people living in the country will have to embrace telemedicine services , he added.
Dr Jitendra Singh said, COVID-19 taught us some lessons and reinforced the need for Telemedicine, as doctors across the country were treating only Covid patients during the pandemic and patients with other diseases or ailments could not be attended because physically visiting the hospital was out of bound for them. Here, telemedicine can come in handy and help, he added.
Dwelling on the need for Telemedicine facility, Dr Jitendra Singh lamented that this aspect was not given desired attention in the country and said that now the time has come to revive it in a big way for free consultation from home particularly in rural areas. He said that in his Lok Sabha Constituency of Udhampur-Kathua-Doda, tele-consultation facility has been established in the District Hospital at Kathua with all the Panchayats connected with it and it is being monitored on a regular basis.
Dr Jitendra Singh informed that “JIGYASA”, a student- scientist connect programme will be completed in schools of 700 odd districts of the country within one year. He said, the programme jointly executed by CSIR with Kendriya Vidyalaya Sangathan is now operational in 170 districts of the country. The focus is on connecting school students and scientists so as to extend student’s classroom learning with that of a very well planned research laboratory based learning, the Minister added. He said, Jigyasa programme was onspired by Prime Minister Narendra Modi’s vision of a new India which would inculcate the culture of inquisitiveness on one hand and scientific temper on the other, amongst the school students and their teachers.
Dr Jitendra Singh lauded the role of Sewa International and said that it has been there for the last 24 years and has never failed to serve the people in times of crisis and calamities.