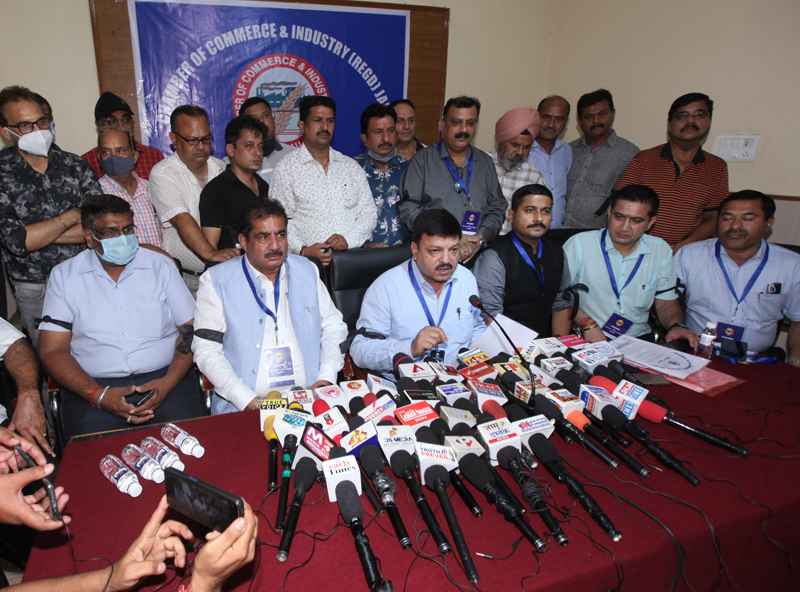 JAMMU, Sept 18: The Chamber of Commerce and Industry (CCI) Jammu expressed great anguish over the discrimination of highest degree with traders and people of Jammu region by the present BJP-led Central Government.

Click here to watch video
Looking into the atrocities of the Government on the business class of Jammu Division, Jammu Chamber has decided to give a clarion call for Jammu bandh on September 22, 2021 due to directionless policies of the Delhi Government and UT Administration which are hitting the business fraternity especially in Jammu region.
Referring to the closure of wine shops and now bars, the CCI chief said firstly, it was wine shop owners who got the jolt by the so-called ‘New Excise Policy’ and now, the Liquor Bar owners are the next targets of the anti-Jammu administration. Hundreds of wine traders have lost their livelihood after the introduction of e-auction of liquor vends in Jammu and Kashmir. Majority of 228 liquor traders lost their shops in the e-auction conducted recently in the Jammu and Kashmir.
He said the liquor bars across the UT have been briefly closed as the Excise Department has sought renewal of licenses and ‘No Objection Certificates’ from the more than 20 departments, with the apparent motive to harass the people connected with this trade and then finally close down the bars as well, giving opportunity to the outsiders for the vested interest of the people at the helm of affairs now in the J&K UT.
Nearly, 250 liquor bars are running in J&K including in private hotels and clubs. The above move of the Government as badly affected their livelihood in large. “We have requested the Government several times in this regard but Government is not paying any attention,” Gupta regretted.
The CCI president further said that Banquet halls are also facing the brunt of anti-Government move due to baseless restrictions on numbers of guests. As we know, Covid-19 has broken down the backbone of our traders. Banquet halls are the worst sufferers due to continued lock downs on account of Pandemic and now Government has allowed only 25 persons to attend the social/religious gatherings. It is requested to fix the capping criteria in case of banquet halls as per their size and capacity and allow these to function with 50% capacity.
Referring to the opening of Reliance Stores here. the Jammu Chamber expressed resentment over the proposal of big companies to open stores in Jammu in the retail sector, saying that if this happens then small shopkeepers of Jammu will be ruined and their shops will be closed. The directionless Government has snatched away what was in the hands of traders.
Chamber also opposed end to decade-long annual Darbar Move practice saying it has badly it the trade on both sides besides affecting regional bonding.
He further said that debarring of Mahajan, Khatri , Sikhs and Jains communities from purchasing agricultural lands in J&K, seems to be deep rooted conspiracy. The Govt must review its policy over it.
Referring to sand mining, crushers and Brick kiln trade, Gupta said the policy adopted by the Geology and Mining Department with regard to allotment of mining and extraction contracts is alarming and against public interests. The lack of protective mechanisms in the policy has deprived thousands of families of their livelihood and exposed consumers to exploitation by a mining syndicate. Over 60% of mining contracts have gone to the outsiders. The Govt must relook into the matter and control prices.
He pointed out that under outreach programme by Government of India, over 300 MPs visiting Jammu and Kashmir, seems to be solely meant for Kashmir as practically Jammu is not on their itinerary and it looks that the region is declared as out of bound for the visiting delegates. Those who visited Jammu they only preferred to meet the leaders belonging to a particular party, ignoring the stakeholders of Jammu region. It seems that Government is acting totally against the interest of the Jammu people and is appeasing the people of the other region despite Jammu being the nationalist and staunch supporter of the Government.
He said the Passenger tax on commercial vehicles is not applicable anywhere in any UT of India. CCI questions the Government why it is being charged in J&K UT, Gupta asked.
“Looking into such prejudice with the people of Jammu in general and traders in particular, the JCCI has decided to go on an agitation path and the first step in this regard is the Jammu Bandh on September 22. He appealed to the people of the region to extend support to this call for awakening the government from deep slumber as it has been taking people of Jammu as for granted and paying full attention towards Kashmir.
Meanwhile, Congress and several other social and trade organizations have supported Jammu Bandh call for Sept 22.