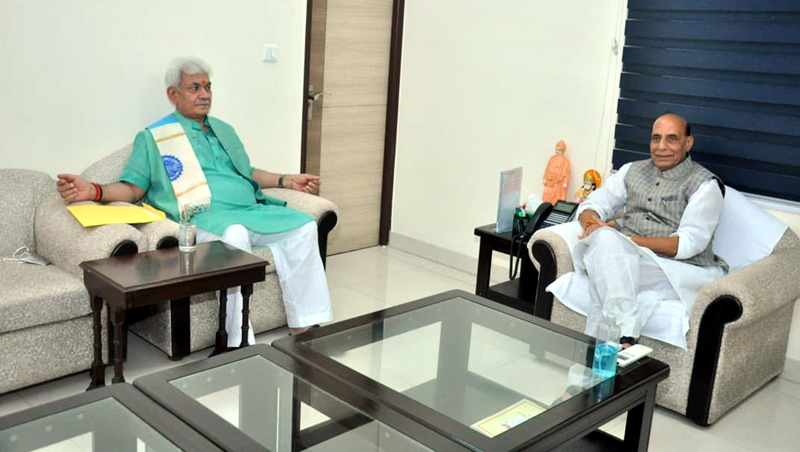 JAMMU, Sept 20: Lieutenant Governor Manoj Sinha today met Defence Minister Rajnath Singh in New Delhi as the former left for the Union capital from here amidst reports that the Central Government was concerned about Taliban rise in Afghanistan and rising China-Pakistan-Taliban nexus even as security agencies maintained that the country’s borders are fully protected and safe and there is no threat.
Sinha left for New Delhi this afternoon and had more than half an hour long meeting with the Defence Minister.
“Lieutenant Governor of Jammu and Kashmir Manoj Sinha called on Raksha Mantri Rajnath Singh in New Delhi,” a tweet by the Defence Ministry said but gave no further details as to what transpired at the meeting.
Sinha is scheduled to return to the Union Territory tomorrow afternoon. He is likely to meet couple of more Central Government representatives before his return.
While there was no official word on the meeting either by the Defence Ministry or the Jammu and Kashmir Government, sources said protection of country’s borders in Jammu and Kashmir where India shares long boundary with Pakistan (both Line of Control and International Border) could be high on agenda as this was first one-to-one meeting of Sinha with Rajnath Singh post Kabul fall to Taliban and increasing influence of India’s adversaries—China and Pakistan in Afghanistan.
“The Defence Minister and the Lieutenant Governor are understood to have discussed in detail the situation prevailing on the LoC in the Union Territory of Jammu and Kashmir and preparedness of the troops to counter any kind of threat emanating from Taliban or Al-Qaeda,” sources said.
However, on ground, sources said the ceasefire agreement between Indo-Pak troops along LoC as well as International Border in Jammu and Kashmir has been completely holding but there has been certain infiltration attempts by the militants in Rajouri and Poonch districts in the Jammu region along LoC. While majority of intrusion bids by the militants have been successfully thwarted by the troops, there have been reports that a couple of infiltrations might have been successful.
Manoj Sinha is reported to have briefed the Defence Minister about situation along LoC and IB.
“Though there has been ceasefire on the LoC, there were reports that Pakistan army and militant outfits including Lashkar-e-Toiba (LeT) and Hizbul Mujahideen were trying to push militants into Jammu and Kashmir to flare up the militancy which has already been on the rise in twin border districts of Poonch and Rajouri besides Kishtwar, Doda and Ramban districts albeit there has been no major terror act and number of militants and Over Ground Workers (OGWs) have been arrested.
On the LoC as well as hinterland, Army and police have killed a number of militants in Rajouri and Poonch districts.
On September 9, Union Home Minister Amit Shah had held high-level review of security situation in Jammu and Kashmir which was his first meeting on the Union Territory affairs post Afghanistan fall to Taliban.
Besides the Lieutenant Governor, top civil, police and Intelligence officials from Jammu and Kashmir, chiefs of Army and all para-military forces and Intelligence agencies and top officials of the Ministry of Home Affairs (MHA) had attended the meeting.
After the meeting, Army chief General MM Naravane and BSF chief Pankaj Singh had visited Western Command and International Border respectively in Jammu.
There have been reports that Pakistan-based terror groups Jaish-e-Mohammad and Lashkar-e-Toiba — both active in Jammu and Kashmir and involved in a large number of terror attacks in the past — have shifted their bases to Afghanistan with a friendly Taliban regime in place.
Sirajuddin Haqqani, the new acting Interior Minister of Afghanistan, is the head of the terror group Haqqani network, which was responsible for attacks on Indian assets, including the Indian embassy in Kabul, in the past.
Sources said the Central Government is also concerned about increasing threat from drone attacks especially in the areas falling along the LoC and IB and security establishments as there were reports that Pakistan army and Inter-Services Intelligence (ISI) have secured many sophisticated drones from China which have higher range of flying.
“There have also been concerns about the anti-drone technology. Security experts are of the view that it should be fool-proof as shots fired at drones shouldn’t hit the own helicopters,” sources said, adding for the purpose a greater coordination was required among the security agencies.