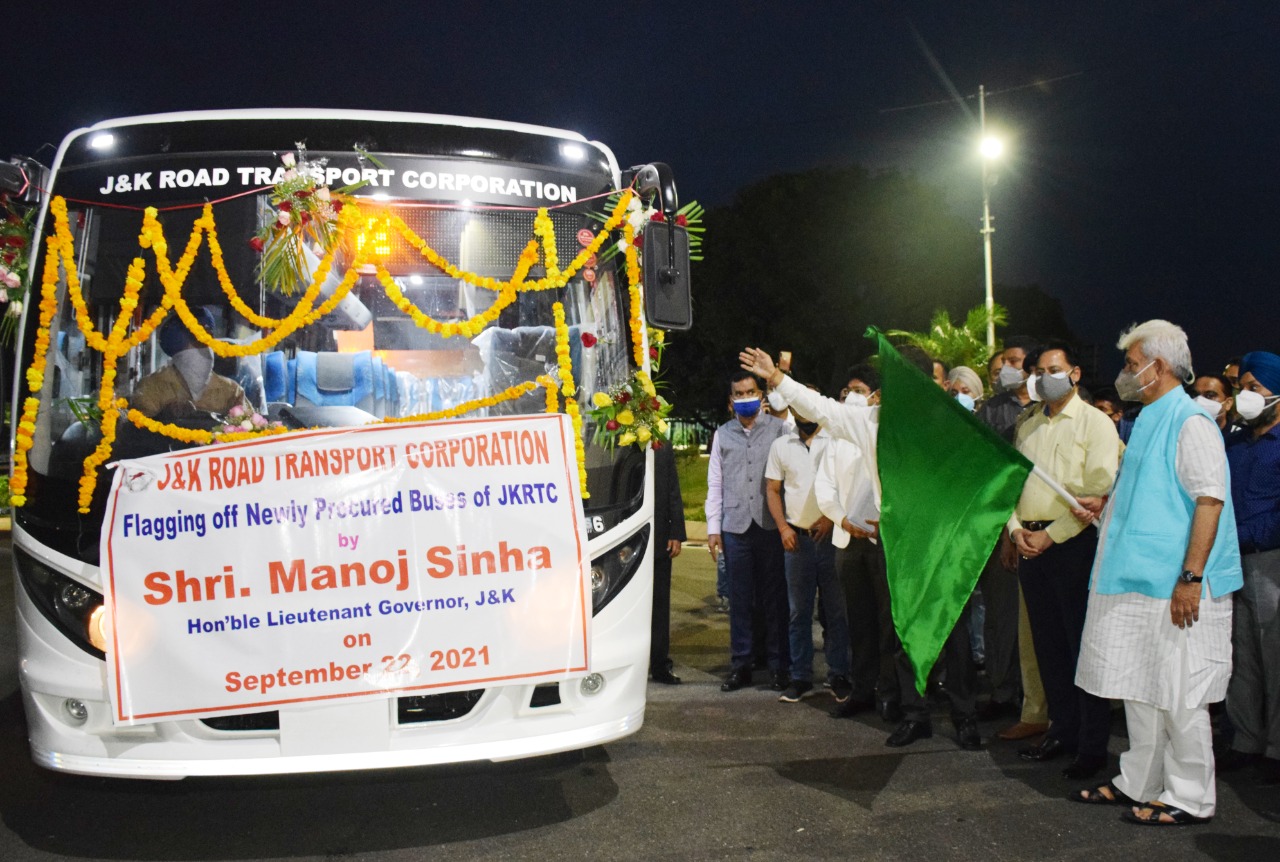 Jammu, Sept 22: Lieutenant Governor, Manoj Sinha today flagged off the first lot of 95 newly procured Buses of J&K Road Transport Corporation (JKRTC) and dedicated them to the service of people of J&K.
The newly procured buses are part of the revival plan which involves a major expansion of JKRTC’s fleet with the addition of more than 500 new vehicles in a gradual manner.
On the occasion, the Lt Governor said that by augmenting the fleet of busses, JKRTC will be in a position to expand its operational network, besides providing safe, secure, hassle-free, and economical transport services to the general public of the UT.
He reiterated J&K Government’s commitment to provide quality transport facilities to the public in the UT, and said that the unprecedented augmentation of public transport system will boost revenue generation as more and more viable and lucrative routes will be included in the operational network of corporation.
“Connectivity brings people closer and it is one of the key drivers of growth and prosperity,” Lt Governor said.
He further said that the new addition will address the long pending demand of the general public of remote areas as the preference for operation of new buses among other routes will be given to the remote areas of UT of Jammu and Kashmir, besides major Interstate routes.
The UT Government has made significant advances towards improving the standards of Mass Public Transportation by providing cost-effective and convenient public transport to cater to the needs of the people, observed the Lt Governor.
Dedicated efforts are being made to reach out to the unconnected habitations with transport connectivity, especially in rural and remote areas so that the population living in these areas can be provided with better means of transportation, added the Lt Governor.
Pertinently, JKRTC is the only Transport Corporation in the Country having both types of Transport vehicles viz Goods as well as Passenger vehicles. It also ensures timely transportation of food grains and other essential commodities to every nook and corner of the UT of J&K, besides playing vital role during exigencies like natural calamities including earthquakes and floods.
As part of the revival plan of JKRTC, a total of 503 vehicles including 277 Trucks, 185 Buses and 41 AC Buses will be added to the fleet of JKRTC in a phased manner.
By adding 277 Trucks to the fleet of JKRTC, the general public will be benefitted by prompt delivery of essential commodities including food grains particularly the people living far-flung and inaccessible areas.
On the occasion, the Lt Governor felicitated Ms Navleen Kour for designing the graphics for newly procured vehicles. Her design was selected through crowd sourcing by JKRTC.
Hirdesh Kumar, Administrative Secretary Transport Department; Mukesh Singh, ADGP; Raghav Langer, Divisional Commissioner Jammu; Anshul Garg, Deputy Commissioner Jammu; Angrez Singh Rana, MD JKRTC besides other senior officers of UT administration were present on the occasion.