This artist from Kashmir created the world’s smallest painting of Holy Kabbah on ring, leaf 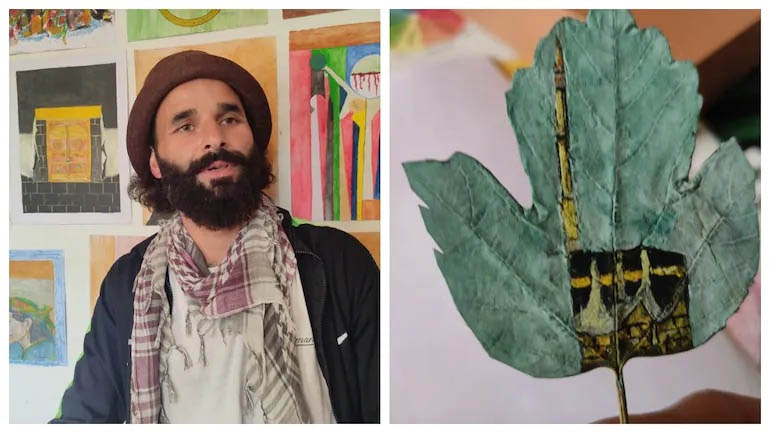 SRINAGAR, Oct 4: A young artist from South Kashmir’s Kulgam district has managed to secure a mention in the Asian and Indian Book of Records for his exceptional talent.
Mudasir Rehman Dar, 26, from Kulpora village of Kulgam has achieved the feat by creating the smallest painting of the Holy Kabba on a ring and a leaf, which is a first in Jammu and Kashmir.
A self-taught artist, Mudasir said that he has been interested in painting from his childhood but due to the absence of a suitable platform that could have promoted him, he was quite behind in achieving his goals. He is the first artist from Kashmir to be featured in Asia, Indian Book of Records.
“I have my unique style of painting and paint on the themes that I find around me and are cent per cent original in nature,” he told said.
Mudasir finally turned to social media, which eventually brought him fame. “I create abstract paintings and portraits and while I was craving a platform, social media gave me one and my work started getting noticed,” he said. Though Mudasir works on various themes, his main motive is to portray social evils through his artwork, along with focusing on the menace of drug abuse, child labour and other social evils that exist in society. He said that his mention in the record books is an acknowledgement of his work and the appreciation of his creativity and originality; however, he said that he still wants a platform to showcase his artwork. (Agencies)