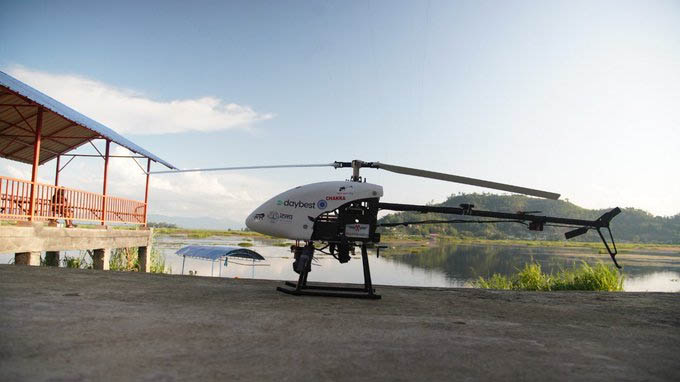 New Delhi, Oct 4 : The Union Health Minister, Mansukh Mandaviya, on Monday, launched the Indian Council of Medical Research’s (ICMR) vaccine delivery model — Drone Response and Outreach in North East (i-Drone) that aims at supplying the COVID-19 vaccines and essential medical supplies.
In collaboration with IIT, Kanpur, the ICMR developed i-Drone is the first of its kind in South Asia to be the first flying commercial drone in the region. This will facilitate vaccine delivery to tough and difficult-to-reach terrains of the country.
“On October 4, India transported vaccines across 31 km in Manipur, reaching the remote and hilly regions conveniently,” tweeted the Health Minister.
The Union Minister said, “Covering 31 km in 15 mins, vaccines were transported from Bishnupur District Hospital to Karang Health Centre, Loktak Lake, Manipur.”
Talking about the usability of the drone, he said that it is not only for vaccine supply but also for transporting essential medicines.
“It is the first commercial flying of a drone in South Asia, 31 km distance was covered in 13-15 mins. It is not only for vaccine supply, but we’ll also transport blood samples, essential medicines using drones in the future,” he said.
According to the statement from the Union Ministry of health and family welfare, ICMR conducted an initial study in collaboration with the Indian Institute of Technology, Kanpur to test the capacity of drones to carry and transfer vaccines safely. The study was conducted in Manipur, Nagaland and Andaman and Nicobar. These studies provided promising results on the basis of which the Ministry of Civil Aviation (MoCA), Directorate General of Civil Aviation (DGCA) and other regulatory authorities have granted permission to fly drones beyond the Visual Line Of Sight.
Emblazoning India’s nationwide vaccination drive, he said that India is soon going to administer 100 crore doses.
“91 crore vaccine doses administered so far, in next few days India will cover 100 crore doses,” Mansukh Mandaviya said.
Rajesh Bhushan, Secretary, Ministry of Health and Family Welfare, Dr Balram Bhargava, Director General, ICMR and other senior officers of the Ministry were also present during the launch of the ICMR’s Drone-based Vaccine delivery model.
Notably, Telangana had launched beyond visual line of sight flights to deliver a payload comprising vaccines last month. (Agencies)