First consignment of walnuts from Budgam dispatched under ODOP initiative 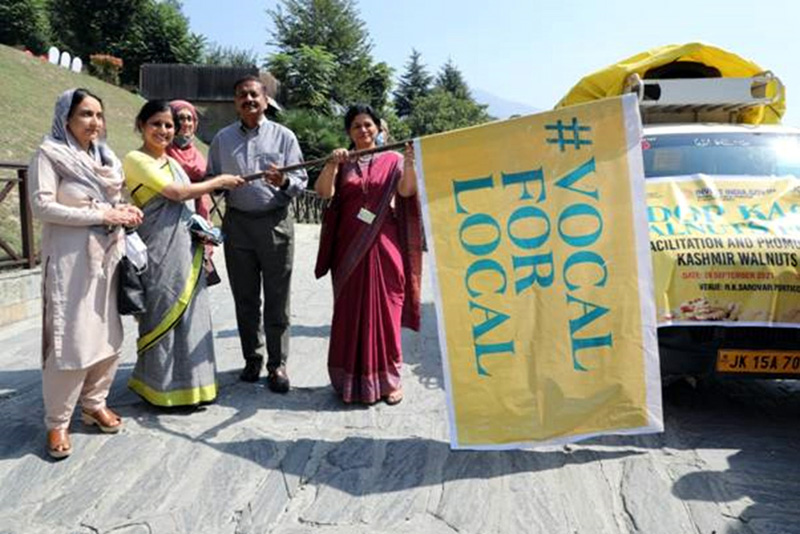 SRINAGAR, Oct 4: The first consignment of Kashmiri walnuts was flagged off from Budgam.
A truck carrying 2,000 kilograms was dispatched to Bengaluru, Karnataka under the One District One Product (ODOP) initiative of the Ministry of Commerce and Industry.
The successful facilitation of trade was marked with a flag off by Additional Secretary, Sumita Dawra, DPIIT that was organized in collaboration with the Jammu and Kashmir Trade Promotion Organization (JKTPO). Ranjan Prakash Thakur, Principal Secretary Industries and Commerce, J&K, Tazayun Mukhtar, Director, Industries, Kashmir, Khalida, Deputy Director, Horticulture, Kashmir and Ankita Kar, MD, JKTPO and Invest India Team were present on the occasion.
Recognizing that walnuts were being imported into India on a large scale despite the availability of Kashmir walnuts, the ‘ODOP’ team began an in-depth market analysis and stakeholder consultations in Kashmir. Further, importers of walnuts in India were contacted and through dedicated handholding at both ends, the ODOP team was able to facilitate the procurement. Such efforts also give a boost to the Aatma Nirbhar Bharat campaign as, for instance, in this case the Bangalore-based importer, who was previously sourcing walnuts from the US, is now able to distribute quality walnuts at a fraction of the import cost.
On the sidelines of the flag off event, a roundtable conference was organized in District Budgam wherein inputs were sought from industry representatives.
Regional Director PHDCCI, Iqbal Fayaz Jan, Baldev Singh, Himayun Wani, Bilal Ahmad Kawoosa, President KCCI, Sheikh Ashiq, Farooq Amin, and President FCIK, Shahid Kamili shared their insights and experiences with respect to the trade and export ecosystem in Kashmir.
Horticulturists and trade representatives recommended the way forward includes domestic and international marketing through Buyer-Seller Meets, e-commerce on boarding of more agricultural and handicraft/handloom products as well as creating product/scheme awareness for products from each district which will be supported by the ODOP initiative under the Ministry of Commerce and Industry.