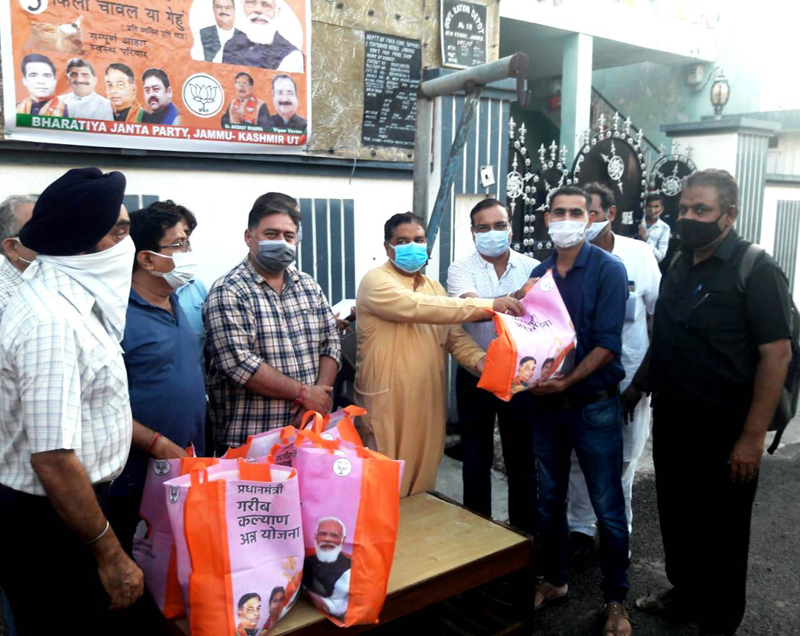 JAMMU, Oct 5: Former Minister and Ex-MLA Jammu West Sat Sharma (CA) distributed free ration amongst a large number of families at New Rehari area, Ward 08 in a programme organized by local Corporator, Dr Akshay Sharma under nationwide Pradhan Mantri Garib Kalyan Anna Yojana(PMGKAY ).
District president BJP, Munish Khajuria, district general secretary, Rajesh Gupta, local residents and political activists were also present on the occasion.
Speaking on the occasion, Sat Sharma said that after independence, almost every Government talked about providing cheap food to the poor but the scope and budget of cheap ration schemes increased year after year, but the effect it should have had remained limited. He stated that now with the efforts of PM Modi the world has acknowledged the Pradhan Mantri Garib Kalyan Anna Yojana and free ration has been made available to more than 80 crore people during the pandemic with the expenditure of more than two lakh crore rupees, he added.
He also stated that Ward wise teams in Jammu West have been constituted to check that the scheme is implemented properly and benefits of the same are provided to deserving persons.
Munish Khajuria said that BJP is committed to assist masses in every way possible and everything is being done to provide food to the needy in these tough times under the flagship scheme of PMGKAY. He also said that former MLA is in regular connect with the public of Jammu West and BJP activists all around constituency are helping the public to avail benefits of various schemes.
Dr Akshay Sharma said that to ameliorate the hardships faced by the poor and the needy due to economic disruptions caused by the pandemic, the Central Government through PMGKAY is helping the poor to overcome the problems. He also complimented former MLA for going Ward wise and helping the poor and needy to take benefits of various Central sponsored schemes.
Anupam Gupta, Dr Surjit Singh, Naveen Sharma, Vipan Verma, Raman Sharma and several others were also present.