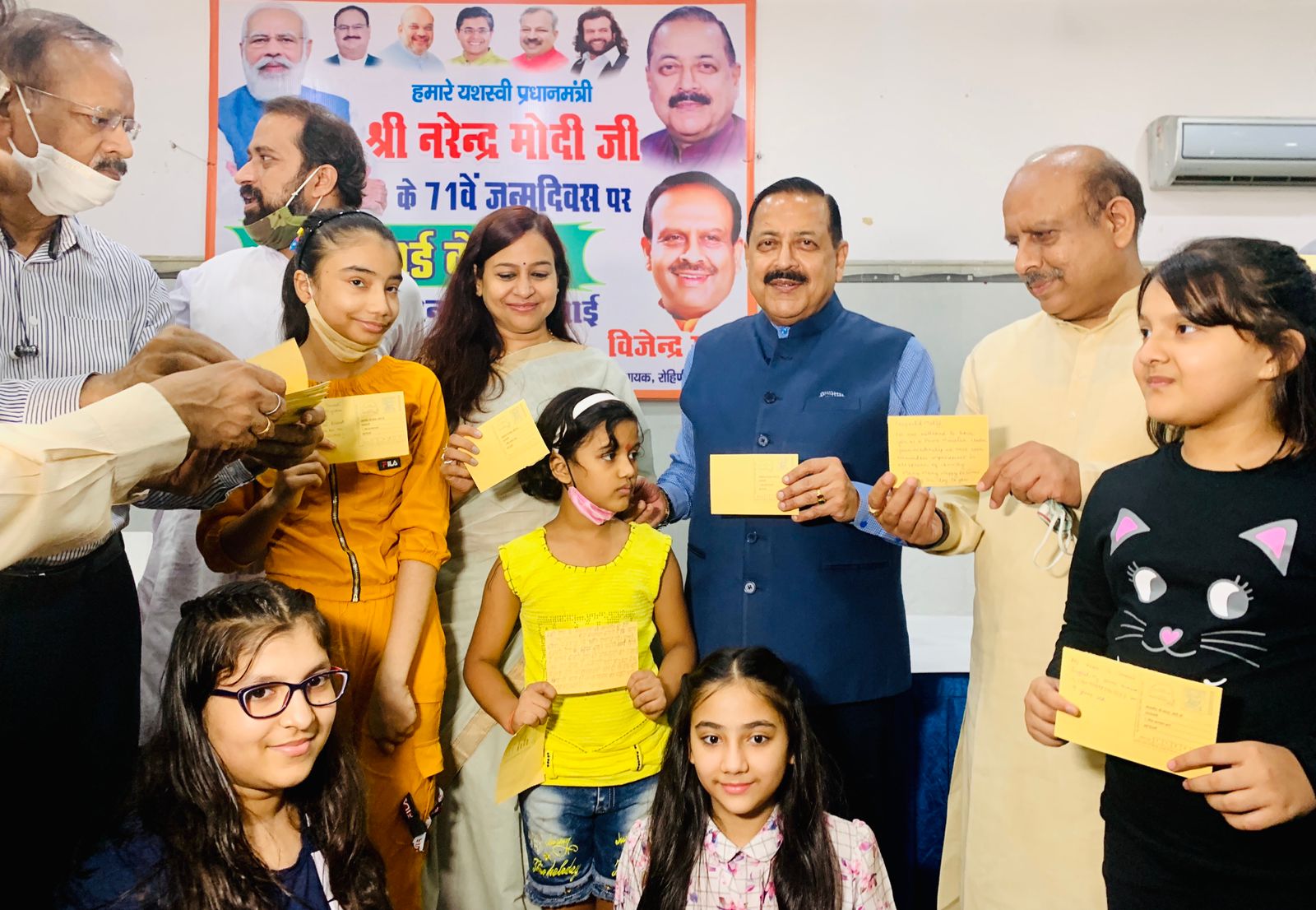 NEW DELHI, Oct 7: Union Minister of State (Independent Charge) Science & Technology; Minister of State (Independent Charge) Earth Sciences; MoS PMO, Personnel, Public Grievances, Pensions, Atomic Energy and Space, Dr Jitendra Singh said today that Narendra Modi, as the head of government for 20 years, created new benchmarks, which are sought to be followed by others.
Addressing a function at Polling Booth No. 92 in the Rohini Assembly Constituency after participating in “Post Card to PM” programme commemorating completion of 20 years of Narendra Modi as the Head of Government, Dr Jitendra Singh said, Modi’s journey as the Head of Government, is a classic example of consistent perseverance, dedication and 24×7 commitment. He said, when Modi took over as Chief Minister of Gujarat on 7th October 2001, the State was going through difficult times, but within a few months, Modi as Chief Minister not only succeeded in putting the State of Gujarat back on the track, but his fast-track development approach came to be known as “Gujarat Model” , which every other State tried to follow.
As Chief Minister, Dr Jitendra Singh said, Narendra Modi was faced with a hostile Central Government and yet his schemes like 24 hour uninterrupted power supply, restoration of River Narmada etc won him popularity across the country. He said, it was a rare thing to happen in the 70 years of post-independent India that from every part of the country, from North to South and East to West, all the Indians were unanimously demanding in one voice that Modi should be given a chance to replicate Gujarat Model at the all India level by taking over as Prime Minister of the country.
Having watched Prime Minister Modi from close quarters, Dr Jitendra Singh said, the most distinguished quality of the Prime Minister is that he does not preach but practises what he believes and there is a great deal to learn simply by watching him.
Describing Modi as a Prime Minister who has the courage and conviction to take bold decisions, Dr Jitendra Singh recalled that in his first Independence Day address on 15 August 2014, he underlined Swachata as a flagship programme and took everybody by surprise by giving a new direction to the government which would give priority to foundational issues which closely related to the life of a common man. Similarly, he recalled that in his second Independence Day address, Modi gave a call for abolition of interview in recruitment to government jobs, thus giving a clear signal that he was aiming at a dispensation which would ensure a transparent, corruption-free and level-playing field for the youth of the country.
Following the same approach, Dr Jitendra Singh said, during the COVID time, Narendra Modi excelled every other Head of the Government in the world through his farsighted vision as well as insightful approach. Under the Modi government, within a year India achieved the distinction of becoming a country which had rapidly moved on from a state of shortage of PPE Kits to a capacity of developing more than one vaccines and exporting these to other countries. This in turn, also established Modi as a world leader to be reckoned with, he added.