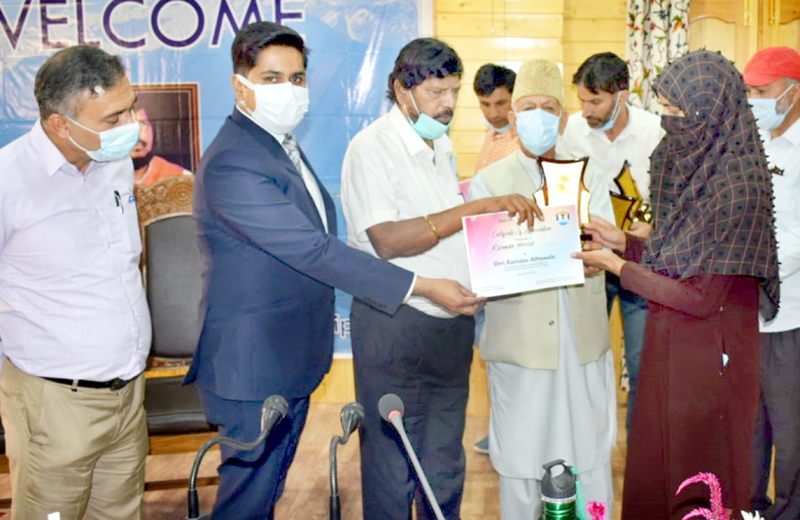 Excelsior Correspondent
BANDIPORA, Oct 6: As a part of Central Government’s outreach to J&K, Union Minister of State for Social Justice and Empowerment Ramdas Athawale today e-inaugurated various developmental projects in Bandipora.
During his visit, the Minister formally e-inaugurated the 1000 LPM Oxygen Generation Plant at Government District Hospital Bandipora installed at the cost of Rs 6.75 crores. He also inaugurated the complex of Government Middle School Saderkoot Bala and Government Primary School Sadunara.
The Minister also released a book on domestic violence compiled by Mahila Shakti Kendra Bandipora and One Stop Centre Bandipora in collaboration with the district administration.
Urging people to take benefits from various Central Government schemes, the Minister said that the Government has undertaken several initiatives for the overall development of the people with special focus on empowerment of the disadvantaged and marginalized sections of the society.
He said that the Ministry of Social Justice and Empowerment has been implementing various schemes for the social, educational and economic development of the target groups with considerable improvement.
Sharing the vision of the Prime Minister, Athawale said that “Sabka Sath Sabka Vikas” slogan by the Prime Minister is not merely a slogan but a mission that will ensure the paradigm shift in the socio-economic condition of the people who belong to the weaker sections of the society. He said that the PM wants his ministers to assess on-ground situation and take feedback from the public to bring about positive changes.
Later, the Minister interacted with public delegations who highlighted their grievances and raised several demands before the Minister. Athwale assured that the Government will attend to their grievances on priority basis.
The Minister also visited sector headquarter BSF at Madder and interacted with BSF Jawans. He hailed their services in protecting the lives of the people and the integrity of the country.
Athawale was accompanied by Chairman District Development Council Abdul Gani, Deputy Commissioner Dr. Owais Ahmad, Director General Social Welfare Department B. A. Dar, Additional District Development Commissioner Ali Afsar Khan, Senior Superintendent of Police Mohammad Zahid, Additional Deputy Commissioner Zahoor Ahmad Mir, and other senior officers of the district.