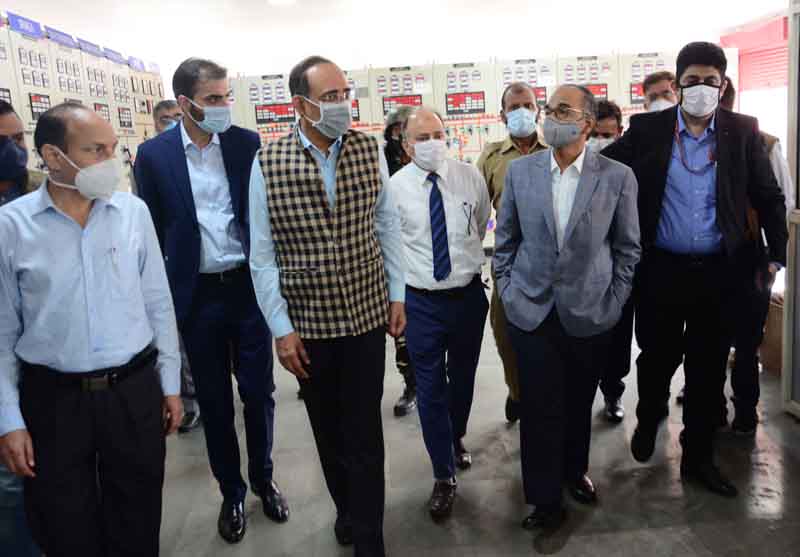 Excelsior Correspondent
KISHTWAR, Oct 6: Union Power Secretary, Alok Kumar, today visited dam site of 1000 MW Pakal Dul Hydro Electric Project, being executed by CVPPL, a joint venture of NHPC and JKSPDC, at Drangdhuran in Kishtwar district to inspect ongoing construction works in the dam complex.
Union Secretary was accompanied by Principal Secretary, PDD, Rohit Kansal; CMD, NHPC, Abhay Kumar Singh; Union Joint Secretary Power, Vishal Kapoor and other officers of PDD.
Union Secretary, after having a brief overview about the project layout, inspected the ongoing construction works on the diversion tunnel. He expressed satisfaction over the pace of progress on the works being executed under the project.
He asked the concerned to ensure that construction work on coffer dam and Concrete Face Rockfill dam can be commenced at the earliest for completion of the prestigious project within scheduled time.
“Completion of this project will not only add to existing electricity generation capacity but will contribute immensely towards growth and development of the district and the UT as well”, he maintained.
He expressed hope that the power projects in Kishtwar in particular and in Jammu and Kashmir in general will play vital role in providing employment to the local populace.
Managing Director, CVPPL, Rajat Gupta; Deputy Commissioner Kishtwar, Ashok Kumar Sharma; Head of Project, Narender Kumar and other senior officers of CVPPL and district administration were present on the occasion.
Meanwhile, he chaired a meeting to review the progress of various power sector related works and issues in the Union Territory of Jammu & Kashmir.
At the outset, Principal Secretary PDD, Rohit Kansal gave a detailed presentation on the progress of the power sector in distribution, transmission and Hydro projects across J&K.
The Secretary was also briefed about the energy demand and consumption in the Union Territory.
It was also informed that in order to liquidate Power Purchase liabilities, JK has availed soft loans to the tune of Rs 11029.47 cr offer from Government of India to clear liabilities of power purchase to GENCOS and TRANSCOS. Besides, Kansal also informed the Secretary that various compliances have been made which include revised tariff, pre-paid metering, power purchase optimization as well as power supply to 41781 defaulters was disconnected in addition to recovery of Rs 4106.63 lakh arrears and extensive inspection drives.
The meeting was told that the revenue realization has increased by 23.16 percent wherein Rs 954 crore was realized last year and 1176 crore realized ending September this year.
The Secretary also enquired about the functioning of the IT wing of the department, manpower and availability of equipments.
On digital payments, he was informed that the digital payments have jumped manifold and J&K is ranked 3rd across India with a 278 percent increase in digital payments.
On the power generation front, the meeting was informed that 1400 MW is nearing completion with Pakal Dul (100MW), Ratle (850 MW) and Kiru (624 MW) are under construction while historic MOUs were also signed this year.
With respect to generation of clean energy, the Secretary was informed that 9 MW solar power plant is being established at Pampore township of Kashmir, Kishenganga Dam small hydel project to light up Gurez is also under construction, besides 12MW small hydro power project at Karnah is under construction besides 100 year old heritage Mohra project, built in 1902 is being revived.
While discussing the transmission sector of PDD, it was informed that the J&K has witnessed a 150 percent leap in the last two years. During the last 70 years from 1947 to 2019, J&K had 8394 MVA transmission capacity and from April 2019 to March 31, 2022, more 3806 MVA will be added.
He inspected different sections of the station and enquired about the completion timeline of the station.