Home Kashmir Militants will be held accountable for every drop of blood spilled by...
Kashmir

Militants will be held accountable for every drop of blood spilled by them: LG 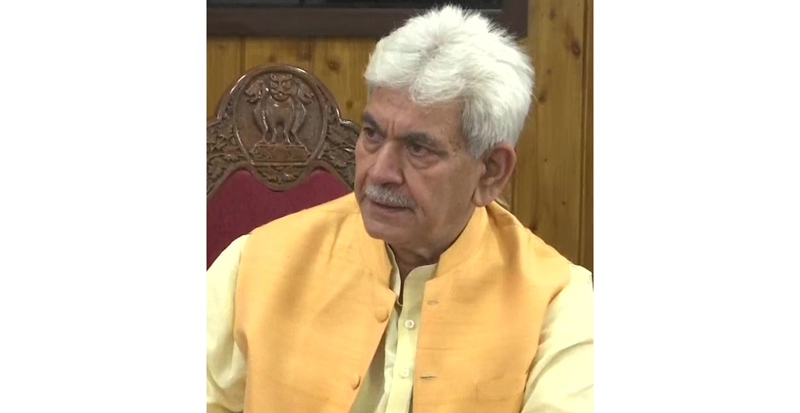 ‘Security of 1.25 cr people our responsibility’

Indicates tough action, says situation will change in a week

We understand pain, emotions of people across country

JAMMU, Oct 7: Toughening stand against the militants after five civilian killings in last three days, Lieutenant Governor Manoj Sinha today declared that the Government will not sit silent till every drop of the blood spilled by the militants is accounted for and said the mentors of terrorists should know that their efforts to derail the process of peace, development and prosperity in Jammu and Kashmir won’t be allowed to succeed.
Asserting that there was wave of anger in the country including Jammu and Kashmir over barbaric killings of innocent persons and blood of every Indian is boiling — be it Srinagar, Bandipora, New Delhi or Madras (Chennai), he assured the people that he understands their pain and emotions and that the militants, who are enemies of humanity, will shortly be held accountable for the killings.
“The militants will have to pay a heavy price for the gruesome killings,” Sinha declared.
“I assure families of those killed that in this hour of grief Jammu and Kashmir administration stands fully with them. There is anger and pain in my mind. We will make militants pay for every drop of your tears. 130 crore people of the country are standing with you,” the Lieutenant Governor said in interaction with the media persons in Srinagar followed by an interview to a national Hindi news channel.
Taking on the mentors of militants, he said: “I want to tell them that their attempts to derail the process of peace, development and prosperity in Jammu and Kashmir will never be allowed to succeed”.
Dropping enough indications that the Government is going to act very tough with the militants including those responsible for the civilian killings, the Lieutenant Governor remarked: “Just give us one week’s time. You will see another picture of the situation in Jammu and Kashmir”. He added that things will be very much clear in next couple of days.
Without naming Pakistan, Sinha said Jammu and Kashmir has been scaling new heights during last two years which the neighbour and its few terror supporters are unable to digest.
Maintaining that security of 1.25 crore people of Jammu and Kashmir is responsibility of security agencies, he said he wants to assure the people that there will be no leniency in the security.
“We are committed to fulfill dreams of every citizen of Jammu and Kashmir. We will work every second to ensure that the people live without any fear,” the Lieutenant Governor said.
Assuring full protection to minorities, he said the militants want to target Kashmiri Pandits, Sikhs and others but all of them will be fully protected. “Providing security to minorities is national responsibility and we will fulfill it”.
Admitting that it was a new kind of challenge with militants targeting civilians with easily hidden pistols, Sinha assured that situation will be controlled soon.
On whether the killings were setback to the Government’s efforts to bring back Kashmiri migrants to the Valley, he said the common man in Kashmir wants people to return but they (the militants) want to derail the process.
On issues voiced from some quarters that the Government doesn’t hold talks, the Lieutenant Governor said he has no objections to talks and has regularly been meeting politicians and local people and his doors are open for common man anytime.
“But those who are saying so must also ponder over what they had done,” he asserted.
He added that the youth of Jammu and Kashmir want development.
“After decades, the youth have new dreams, new role models before them. Every region and every citizen of the Union Territory is looking at the future. In July, 10.5 lakh and in September 12.8 lakh tourists have visited Jammu and Kashmir. Big industrial houses are interested in investing in the Union Territory and all this the militants and their mentors sitting across can’t digest,” the Lieutenant Governor said.
He said the targeted terror attacks on innocents are part of an attempt to disturb communal harmony but all efforts will be made to ensure that they (the militants) don’t succeed in their designs.
He also appealed to the intellectuals to unite against the enemy of humanity and fight the terrorism collectively.