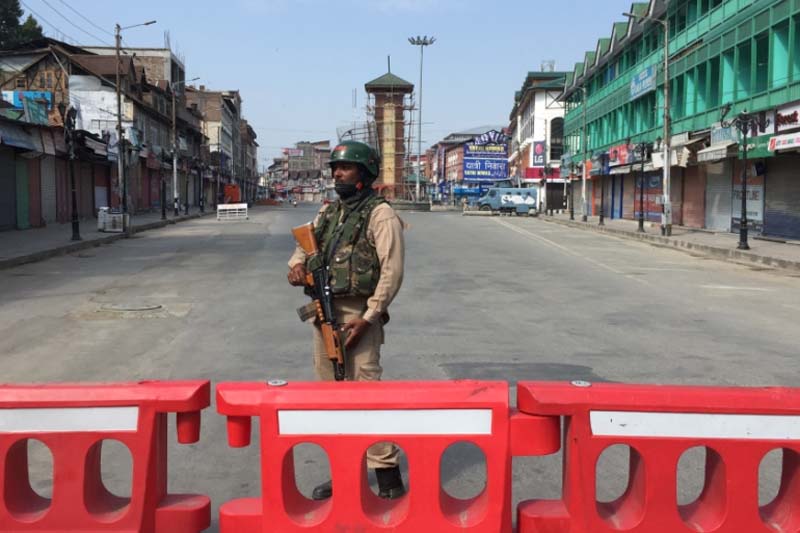 Fayaz Bukhari
Srinagar, Oct 8: A spate of targeted killings in Kashmir has led to the exodus of several Kashmiri Pandits living in transit camps across the Valley despite heightened security around these camps as fear gripped the minority community. Police in Srinagar has shot dead a Lashkar-e-Toiba militant after intensified security measures.
Dozens of families, majority of them Government employees who returned to the Valley after being given jobs under the Prime Minister’s special employment scheme for Kashmiri migrants – have quietly left accommodations yesterday and early today after a series of target killings.
The Kashmiri Pandits living in Sheikhpora in district Budgam – home to the 290 minority Kashmiri Pandit community families, are fearful. Several families left from the transit camp since yesterday. However, police and administration reached the transit camp early in the morning and persuaded the other families to stay back as the security around the camp has been beefed up.
Despite assurances from the administration and police, they are scared. “I’m scared. I have small children, my mother and wife. For them, I have to leave. We are getting calls from our relatives who ask us to leave immediately,” said a Kashmiri Pandit.
In Baramulla outskirts, 145 families mostly Kashmiri Pandit live on the bank of river Jhelum in a transit camp. There are 180 Government employee living here with families. They have been employed in various Government departments for last over a decade.
The camp has been sealed and no one is being allowed to move out. Police and district administration assured the minority families of heightened security and asked them not to panic.
A Kashmir Pandit who refused to divulge his name told Excelsior that he has been living in the camp for last over a decade. “I have never felt scared here even during 2016 when there were protests across Kashmir for several months after Burhan Wani’s killing. Today I am very much scared. In fact everyone here is scared. Government has assured us security but we have to move out, they can’t provide security to every individual”, he said.
“Our entire relatives are in Jammu and because of the worsening situation we are getting calls to leave. We can’t take the risk anymore,” said another Kashmiri Pandit.
In South Kashmir, several families living in transit camps have fled to Jammu. However, since morning the gates of the camp have been closed and no one is being allowed to move out.
The administration has asked the Pandit employees not to attend the duties for next two weeks till the situation improves.
All Kashmiri Migrant Employees Forum today demanded that they should be exempted from the duty till situation stabilises. In a letter addressed to Chief Secretary, they have said that they are in a state of extreme fear and panic.
“The emerging situation reminds us of 1990s which led to mass exodus of Kashmiri Pandits”, read the letter.
They said that Government can’t provide security to employees while they are on duty. “It seems that the government is not capable of providing security to all employees”, the letter read.
In the meantime, security in Srinagar was put on alert and surprise checks have been intensified. And amid this a Lashkar-e-Toiba (LeT) militant was killed in a brief shoot out in Srinagar this evening.
Police said that in a shootout with the police at Natipora area of Srinagar after attacking a police party a militant was killed while a second militant managed to flee.
Kashmir zone police tweeted: “Militants fired at Srinagar Police team (at Natipora). Police also retaliated. During the ensuing chance #encounter, one militant got neutralised but one escaped. Arms & ammunition recovered. Identification being ascertained.”
The entire area has been sealed and the manhunt has been launched to nab the second militant who managed to flee from the spot.
The militant has been identified as Aqib Bashir Kumar of Trenz in district Shopian. He was associated with LeT.