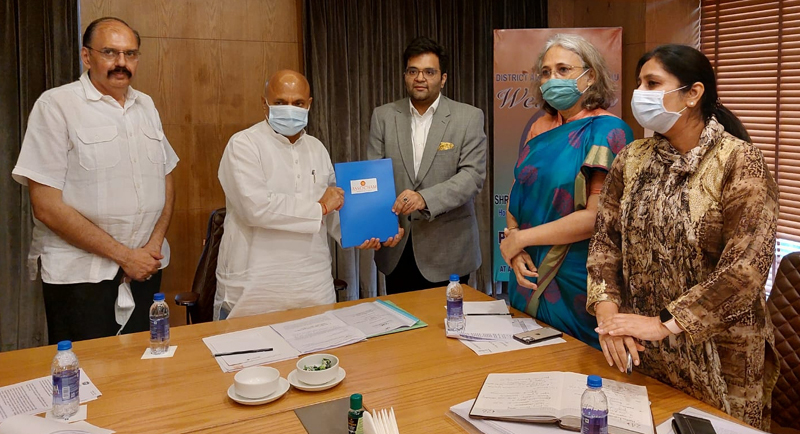 Excelsior Correspondent
JAMMU, Oct 9: An ASSOCHAM delegation from Jammu and Kashmir met the Union Minister for Steel, Ram Chandra Prasad Singh in Jammu and sought extension of the freight subsidy to the industries of the UT.
The delegation led by Manik Batra, Chairman, ASSOCHAM J&K Council, urged the minister that Warehousing Policy should also be provided in J&K for steel industry and traders.
“J&K is a land locked Union Territory, most of the raw material is procured from outside the UT and finished goods are again sent out to different States. This makes the cost of operations high. We request for a freight subsidy for all industrial units manufacturing steel and stainless steel in J&K to make operations more viable and competitive,” Batra said.
Expressing his gratitude to the minister for his tour of the UT, Batra said such visits and interaction would encourage investors to commit more in Jammu and Kashmir.
India was the world’s 2nd largest steel producer with production standing at 111.2 Million Tonne per annum in 2019. The growth of the Indian steel sector has been driven by domestic availability of raw materials such as iron ore & cost effective labour. The steel sector has been a major contributor to India’s manufacturing output.
India’s current steel producing capacity is 140 Million Tonnes per annum and this is anticipated to go upto 300 Million Tonne per annum by 2030-31.
The per capita consumption of steel in India has increased from 57.6 kgs to 74.1 kgs in the last 5 years but the per capita consumption of steel in J&K is still below 50kgs.
“A mother industry of steel be considered with a consideration for logistics to provide iron ore. So that other MSMEs can benefit and a new era is opened up in this land locked state,” said Dr M A Alim, Co-Chairman, ASSOCHAM J&K Council.
The minister gave a patient hearing to the ASSOCHAM delegation and assured that their suggestions would be considered.