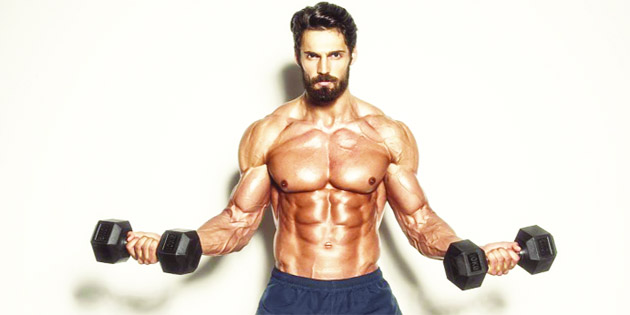 Amogh Rohmetra
Instagram is filled with on-your-face fit people. Between #NoPainNoGain and #GoHard or GoHome, there’s a lot of pressure on life beyond 60-second reels. While a lot has been said about women’s fitness and health, and the trend to ‘Kardashian’ yourself, there’s also a rising trend among men to look their ‘fittest’. And it’s dripping in patriarchy, toxic masculinity and the opposite of body positivity.
In a world where Bollywood sets trends for the youth, we have learnt Badshah, ‘Bajrangi ‘Bhaijaan’ and the Greek gods of Mumbai, have one thing in common – symmetric six-packs. Only a six-packed ‘hero’ can save others and no one else. And when they are not saving the world, the actors are dancing on Instagram reels flaunting their perfect bodies – look at any reel of Tiger Shroff.
The cult of ‘fitness freaks’ is on the rise on social media and it seems to be advocating only one thing – six-pack abs = fitness. One google search on ‘alpha male’ reveals how the fitness lobby thinks an ideal body should look, and there is no escaping the abs. Everyone has forgotten that fitness is first about staying ‘fit’, looks come later.
The six-pack fascination
Most men today think, or are made to think, that pictures without abs are too embarrassing to be put up. Where having a six-pack is nearly impossible without a targeted muscle-development routine and a stringent diet plan, it has been projected as a symbol of superiority that Instagram influencers are making the most of. Even if you are not a part of the ‘#FitSquad’ and posting your daily gym exercise board, Instagram’s AI system won’t spare you. From recommendations of self-proclaimed ‘Indian youth fitness icons’ like Sahil Khan and local gym-boys flexing ‘#sixabs’ to one-minute transformation reels, it will end up taking a mental toll. We have all seen those reels where someone snaps their fingers and instantly look fitter.
The health and fitness apps like healthify me and FITTR only compound this. Not to mention the constant bombardment of dubious pop-up advertisements showing you the best way to get those six-packs. In a world of reels and instant gratification, abs have become the pinnacle of I-made-it games for many men.
What about the ‘online trainers’ and ‘fitness gurus’?
There is also something to be said about the rise of ‘online trainers’ almost overnight, during the lockdown. People seldom question their methods, perhaps because of the supposition that having six packs must prove you’re doing something right. But that’s not a given.
In this tech-savvy world, it is child’s play to edit photos and make photoshopped abs look real. Apps that exclusively edit abs onto your picture are easily available. A lot of times, we don’t even realise that our competition is not with a person but an edited picture.
A by-product of this ‘rush’ is the sham pages that exploit consumers in the name of fitness. Fitness ‘gurus’ with logic-defying and ‘ground-breaking’ approaches have also mushroomed during the pandemic. Eventually, those who are unable to get the results of an intense, ‘7-day abs challenge’, end up getting anxious about their body and it takes a toll on their mental health. Naming a profile prashantsixpack and sixpackabsindia as an influencer shows what fitness means for them.
Every profession requires meticulous study and research, and so does fitness. Can a person become a lawyer without studying law just because they can argue well? But who’s going to tell that to our Insta coaches? In a service-oriented profession like fitness training, building a certain number of followers/subscribers is also seen as a sign of credibility. But many have also often bypassed these by looking for commercial endorsements from ‘blue tick’ pages and taking a follow-for-follow approach. However, the quickest, most efficient and easy way to ‘manufacture’ credibility is to buy followers.
Companies like Locationary, Socialbar, Activeig and Qubeview have been charging upwards of Rs 150 and $2.99 for 100 followers, claiming that they provide ‘quality’ followers.
This is evident in profiles that have followers with common names, short and weird bios, zero posts, no profile pictures, following thousands but with no followers. Interesting, aren’t they? Using social media to merely follow thousands of diverse budding influencers and no socialising.
The problem with ‘fake’ influencers is not that they are fake, but that they are influencers, affecting thousands of followers on a daily basis.
We must not ignore the fact that a lot of good content is also being created on Instagram. However, an integral part of health and fitness has been completely overshadowed by the new ‘quick diet-six pack’ world that projects itself as equally, if not more, important as physical fitness. In order to take a step towards holistic fitness, we need to stay away from the trends social media is setting. Instead of having #sixpack to show others, it’s better to #stayfit for yourself.
(Courtesy : The Print)