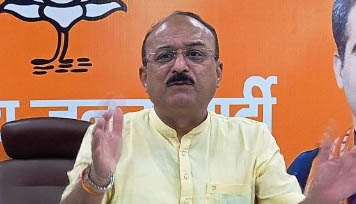 Jammu, Oct 10: Jammu and Kashmir Co-incharge and Bharatiya Janata Party (BJP) leader Ashish Sood on Sunday said that the selective outrage against killings in the union territory has exposed so-called political parties.
“Democratic process can’t be derailed and statements given to break the country won’t last long,” Sood said while slamming the former Chief Minister of Jammu and Kashmir Mehbooba Mufti’s statements on killings,
Sood said, “Mufti speaks only for her political gains; haven’t heard her saying a word on Sikhs and Hindu killings”.
“Their silence speaks about the corrupt mindset and that they are displeased about peace in the region. They didn’t utter a word about targeted killings of non-Muslims in the valley,” he added.
“And they dare ask what the government is doing? Government and security forces are giving befitting replies to militants,” he stated.
Earlier on Thursday, Jammu and Kashmir Peoples Democratic Party (JKPDP) chief Mehbooba Mufti said that the recent terror attacks on civilians in the Kashmir valley show the failure of the ‘double engine’ governments of Jammu and Kashmir administration and Centre, which may put more restrictions on union territory. (Agencies)