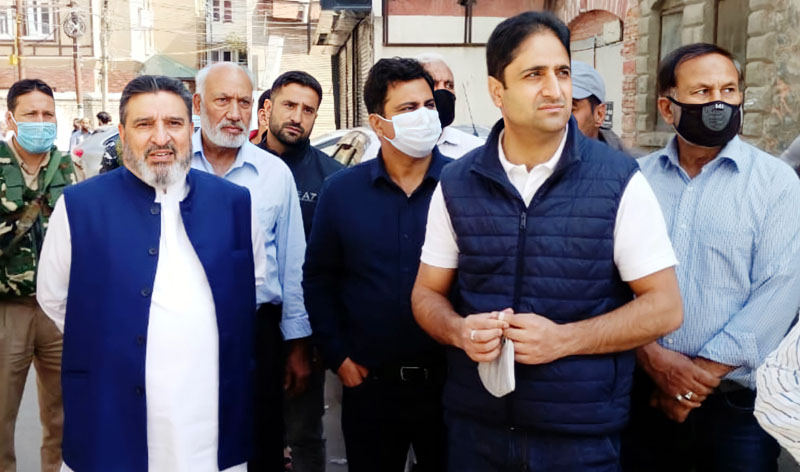 Excelsior Correspondent
SRINAGAR, Oct 10: Apni Party president, Syed Mohammad Altaf Bukhari in an extensive tour today visited the Abi Guzar area of Amira Kadal Constituency in Srinagar.
During the visit, Bukhari was accompanied by Mayor SMC & Apni Party State Youth president Junaid Azim Mattu besides the senior officers of Irrigation and Flood Control Department and other allied departments.
The party president was apprised about the status of various ongoing developmental works being executed under the Smart City project besides the other works in progress.
In a statement issued here, Bukhari expressed satisfaction over the infrastructural up-gradation in the area especially in the form of better inner roads, tiled lanes and alleys, proper drainage and an extensive installation of street lights.
“Various works have been completed, some are under execution while others will be commencing soon. I am satisfied with the progress on these works and the dedication of the officials who bear the responsibility of the execution of this prestigious project,” he said.
He also hoped that the public welfare works in this area will be further ramped up so that people have to face no inconvenience in whatsoever manner.
During this visit, Bukhari met various local residents who informed him about their pressing grievances and demanded prompt actions by the authorities.
Apni Party president, considerately listened to the pleas of natives and assured them that their genuine grievances will be raised with the competent authorities and the party leadership will follow it rigorously until these issues are addressed at an earliest.