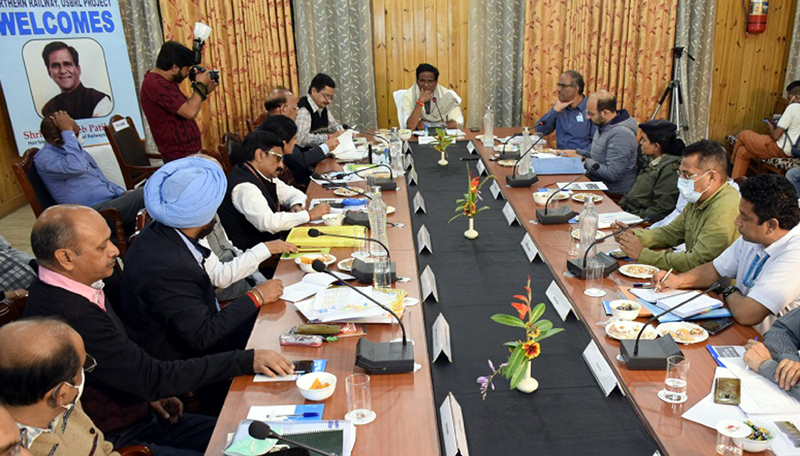 Excelsior Correspondent
RAMBAN, Oct 10: Union Minister of State for Railways, Coal and Mines, Raosaheb Patil Danve, who is on a 2-day visit of district Ramban as a part of the Union Government’s Public Outreach Programme, reviewed the pace of progress on 272 kms long Udhampur-Srinagar-Baramulla Railway Line project, besides taking stock of issues hindering the pace of progress on prestigious project in a meeting at Patnitop today.
Reviewing the pace of progress on the prestigious Udhampur-Srinagar-Baramulla Railway Line (USBRL) project, the Minister directed the concerned to complete the dream project of Prime Minister Narendra Modi by 2023, saying that there is no dearth of funds for the development and welfare of the people of the country.
Taking first hand appraisal of pace of progress on land acquisition, availability of construction material and minor minerals, he asked the Railway Authorities, district administrations and construction agencies to redouble their efforts to meet its timely completion which will connect the Kashmir Valley with the rest of the country through rail link. He instructed the concerned authorities to adopt the permission procedure in due course of time for procurement of construction material so that early completion of this prestigious project is ensured.
Reviewing the availability of construction materials for executing agencies, the Minister directed district administration to issue short term permits so that Railways could procure essential construction material without any problem in future also.
While enquiring about causes of delay of project, Danve sought a detailed report on project’s cost escalation from Chief Engineers of all wings of the project.
Giving a detailed presentation on USBRL by the Railway authorities about the alignment, latest progress of work, salient features of the project, challenges, issues which need to be resolved, the Minister was informed that world’s most advanced technologies are being used for planning and construction of this National prestigious project.
The Minister was informed that the total length of USBRL is 272 KMs, of which 161 KM has already been commissioned, while as the work on the rest 111 Kms Katra-Banihal stretch is in progress and is expected to be completed by April 2023. The Katra- Banihal stretch comprises 27 tunnels and 8 Escape tunnels involving 97 Kms tunnelling work. The T-49 is the longest tunnel i.e., 12.75 Kms situated between Sumber- Arpinchala in Sangaldan area of Ramban district.
The project is being constructed at an estimated cost of Rs. 27,949 crores.
It was informed that more than 200 Kms of approach roads including 1 tunnel and 320 bridges have been constructed to reach the working sites. A road bridge over river Chenab near Dhamkund on Ramban-Gool state highway has been constructed to move heavy materials, the meeting was informed and added that this road bridge is connecting Sangaldan, Gool, Mahore, Arnas, Kanthan and Reasi.
The meeting was informed that one special bridge across the river Chenab having central span of 467 m is being built at a height of 359 m from the river bed, adding that, it will the highest rail bridge in the world, when completed. As many as 37 bridges with combined length of 7.035 Kms are being constructed on Katra-Banihal section, of which 23 have been completed and work on rest of the bridges is in progress, the meeting was informed.
The 136 km railway line from Banihal to Baramulla has already been commissioned and its electrification work is in progress. All tenders have been awarded and S&T plan have also been approved and work is under progress in full swing. The target for completion of Railway Electrification works in Banihal-Baramulla section is March-2022.
Earlier, the District Development Commissioner briefed that land acquisition process for prestigious project stands completed, besides other logistics supports are also being provided to the concerned executing agencies. He also gave a brief account of establishment of 3- tier PRIs system.