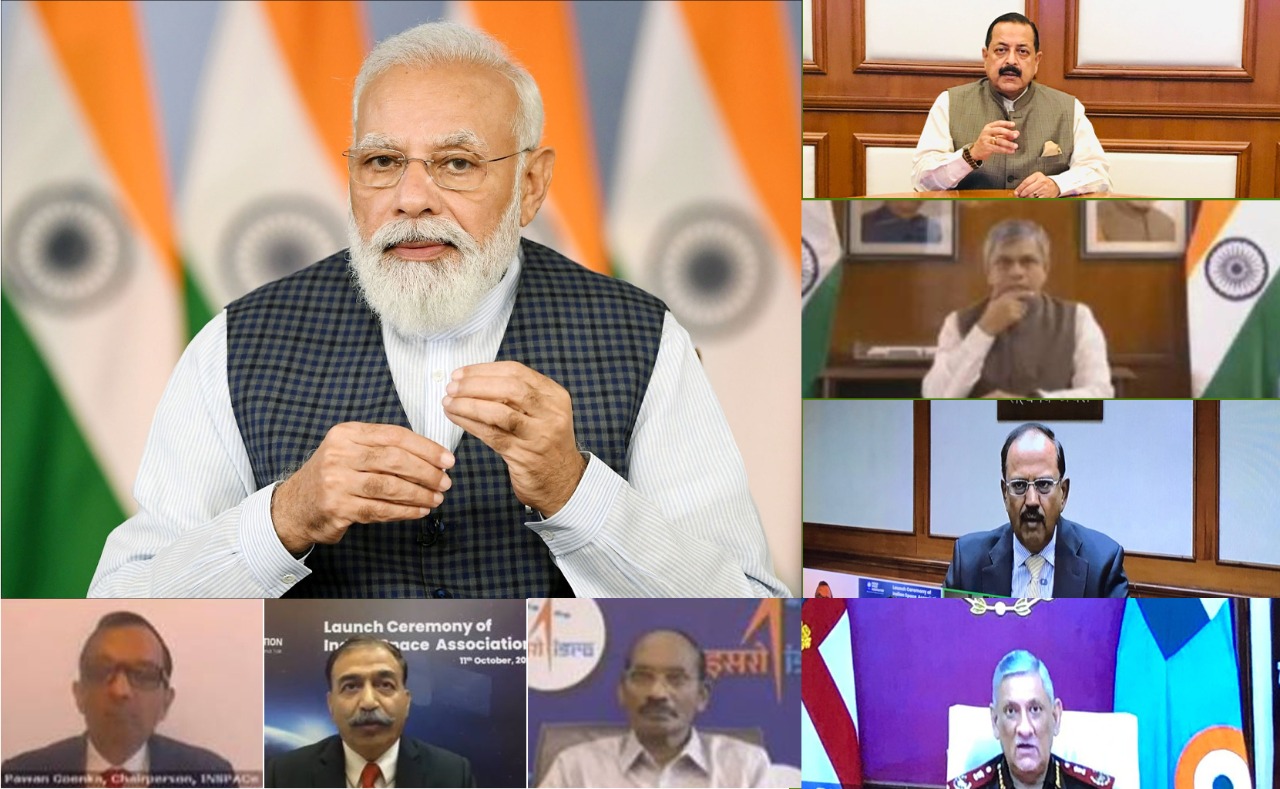 NEW DELHI, Oct 11 : In a landmark breakthrough, Prime Minister Narendra Modi today launched Indian Space Association (ISpA) via video conferencing.
Among those present on the occasion were Union Ministers Dr Jitendra Singh and Ashwani Vaishnav, NSA Ajit Doval, Chairman ISRO Dr K. Sivan, CDS Gen Bipin Rawat, Chairman INSPACE Dr Goenka and Sunil Mittal of Bharti Airtel, in addition to representatives from the industry.
Prime Minister also interacted with representatives of the Space Industry.
Addressing the gathering, the Prime Minister Narendra Modi noted the birth anniversary of two great sons of the country, Bharat Ratna Jayaprakash Narayan and Bharat Ratna Nanaji Deshmukh today. These two great personalities have played a huge role in giving direction to post-independence India. They showed how, by taking everyone along, with everyone’s efforts, major changes become reality for the nation. Their philosophy of life inspires us even today, the Prime Minister said paying tribute to the two personalities.
Modi stressed that there has never been such a decisive government in India as it is today. The major reforms that are happening in India today in the Space Sector and Space Tech are an example of this. He congratulated all of those present for the formation of the Indian Space Association – (ISpA).
The Prime Minister remarked that the Government’s approach to space reforms is based on 4 pillars. First, the freedom of innovation to the private sector. Second, the role of the government as an enabler. Third, preparing youth for the future. And fourth, to see the space sector as a resource for the progress of the common man. The Prime Minister said that the space sector is a major medium for the progress of 130 crore countrymen. He remarked that for India, the space sector means better mapping, imaging and connectivity facilities for the common people. Also, the space sector means better speed from shipment to delivery for entrepreneurs, this also means better security and income for fishermen and better forecast of the natural calamity, he added.
The Prime Minister remarked that a self-reliant India campaign is not just a vision but also a well-thought, well-planned, integrated economic strategy. A strategy that will make India a global manufacturing powerhouse by enhancing the skills capabilities of India’s entrepreneurs and India’s youth. A strategy that will make India a global centre of innovations, based on India’s technological expertise. He added that it is a strategy, which will play a big role in global development, enhancing the prestige of India’s human resources and talent, globally.
The Prime Minister said the government is moving ahead with a clear policy regarding public sector enterprises and is opening most of these sectors to private enterprises where the government is not required. The decision regarding Air India shows our commitment and seriousness, he said.
The Prime Minister said that, during the last 7 years, space technology has been converted into a tool of last-mile delivery and leakage-free, transparent governance. He gave examples of the use of geotagging in housing units for the poor, roads and infrastructure projects. Development projects are being monitored by satellite imaging. The space technology is being used in settlement of Fasal Bima Yojna claims, NAVIC system is helping fishermen, disaster management planning is also being carried out through this technology, the Prime Minister informed. The Prime Minister emphasized the importance of making technology accessible to everyone. Giving an example of digital technology, he said that India is among the top digital economies today because we could make the power of data accessible to the poorest of the poor.
Talking about the young entrepreneurs and startups, the Prime Minister said that the government encourages industry, young innovators and startups at every level. He elaborated that to develop a strong startup ecosystem, a platform approach is very important. He defined the platform system as “an approach where the government creates open-access public controlled platforms and makes that available to the industry and enterprises. Entrepreneurs prepare new solutions on this basic platform”. The Prime Minister illustrated this with the example of the platform of UPI which became the basis of a strong fintech network. He said similar platforms are being encouraged in space, geospatial fields and for use of drones in various areas.
The Prime Minister expressed the hope that through the suggestions of the gathering today and active engagement of the stakeholders very soon a better Spacecom policy and Remote Sensing Policy will emerge.
The Prime Minister noted how the 20th-century tendency of trying to rule the space and the space sector, divided the countries of the world. Now in the 21st century, India will have to ensure that space plays an important role in uniting and connecting the world, he concluded.
Dr Jitendra Singh, while speaking on the occasion, said that Prime Minister Narendra Modi has truly democratized India’s Space sector and ensured that Space Technology benefits reach the common man. Space technology has today entered every Indian household, he said.
Under his inspiring leadership India, has achieved outstanding feats like, Mission Mangalyaan; Chandrayan which found water on moon as well as putting 104 satellites in a single mission, said Dr Jitendra Singh.