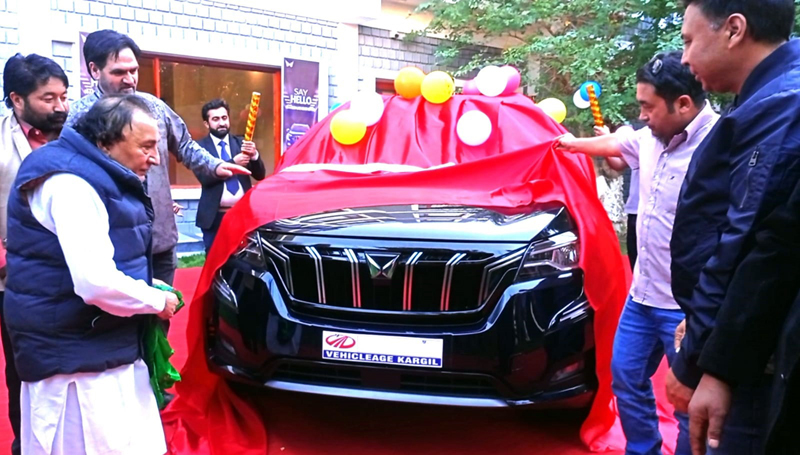 Excelsior Correspondent
KARGIL, Oct 10: Vehicleage Kargil, authorised dealer of Mahindra and Mahindra Limited unveiled new Mahindra XUV 700 here.
Executive Councillor for Works LAHDC Kargil Syed Abass Razvi, Executive Councillor for Health and Agriculture LAHDC Kargil Mohsin Ali, Former Minister Qamar Ali Akhone, former CEC Haji Hanifa Jan, ARTO Kargil Khadim Hussain, Tehsildar Kargil Salim Wazir and prominent citizens of Kargil witnessed the unveiling ceremony.
The ceremony was unique because the traditional tune for welcoming guest was played with folk dance by artist from various parts of Kargil.
Talking to media persons, Shahnawaz Var Managing Director Vehicleage Kargil said that it’s an initiative of Vehicleage Kargil to contribute towards the promotion and preservation of Culture with the unveiling of one of the safest and full of technology car of India, XUV 700.
He said this is the first time that an automobile company is launching its new Model car in Kargil Ladakh.
He added that the craze for XUV 700 has been seen among the customer of Ladakh and have received over a dozen bookings in Kargil within 2 days as Mahindra crossed over 50000 bookings in just two days and we are expecting more in coming days.
He also urged the people of Ladakh to choose Ladakhi dealers to get their dream car eventually which can boost the economy of Ladakh and somehow will help in employment generation and announced that they are open for test drives from Monday. Showing culture and tradition in such events will boost morale of our artists and will also help in promotion of cultural heritage in the society, he added.