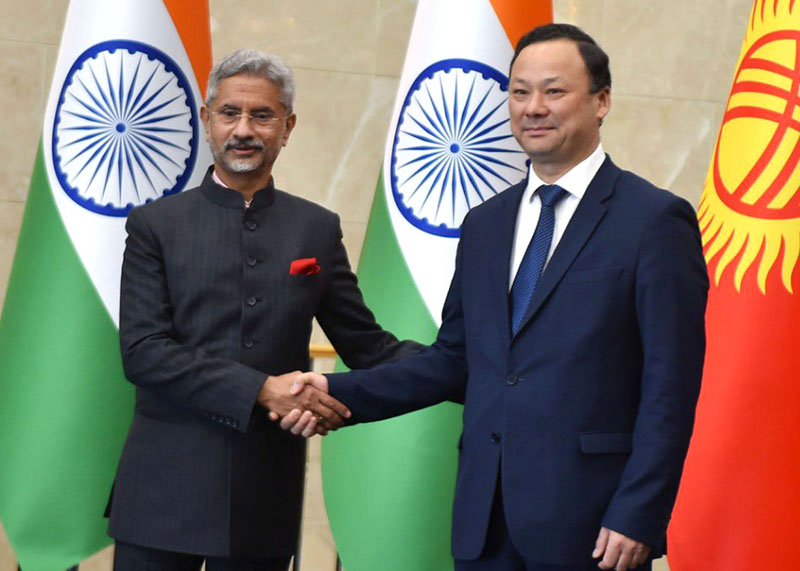 BISHKEK, Oct 11:
India on Monday agreed to provide a USD 200 million Line of Credit support for development projects in Kyrgyzstan, as External Affairs Minister S Jaishankar held “constructive” talks with the Kyrgyz leadership to boost bilateral ties, including defence cooperation and discussed global issues like Afghanistan.
Jaishankar arrived here on Sunday as part of his four-day visit to Kyrgyzstan, Kazakhstan and Armenia with an aim to further expand bilateral ties with the three Central Asian countries.
“Cordial and constructive talks with FM Ruslan Kazakbaev of Kyrgyz Republic. Agreed on USD 200 million LoC to support development projects. Also concluded an understanding on executing high impact community projects,” Jaishankar tweeted.
According to a statement by the Ministry of External Affairs, the signing of the MoU on High Impact Community Development Projects (HICDP) will enable implementation of quick community development projects in various sectors for the benefit of common people under full grant funding by the Government of India.
Jaishankar said that discussion on developments in Afghanistan and its implications for the peace and security of the region occupied some time in his talks with Kazakbaev.
“We are closely following the developments in Afghanistan. It concerns all of us. Any instability in Afghanistan will have an impact in the region. There are expectations of the international community from the current regime in Afghanistan, which are adequately elaborated in the UNSCR 2593,” he said.
“India and Kyrgyz Republic have a shared approach to developments in Afghanistan,” he said in a tweet. Noting that India and Kyrgyz Republic traditionally share close and cordial relations underpinned by historical and civilisational ties, Jaishankar said that periodic high-level exchanges between the two countries has been useful in strengthening and expanding the horizons of the bilateral relations. “I had today a detailed and productive meeting today morning with Foreign Minister Ruslan Kazakbaev on various facets of our cooperation. We shared an overall sense that our bilateral relations are progressing very well,” he said. They evaluated the defence exchanges and personnel-training between the two countries very positively during the discussions. “Given our common interest in maintaining peace and security in the region, defence and security cooperation occupies an important place in our relations. (PTI)