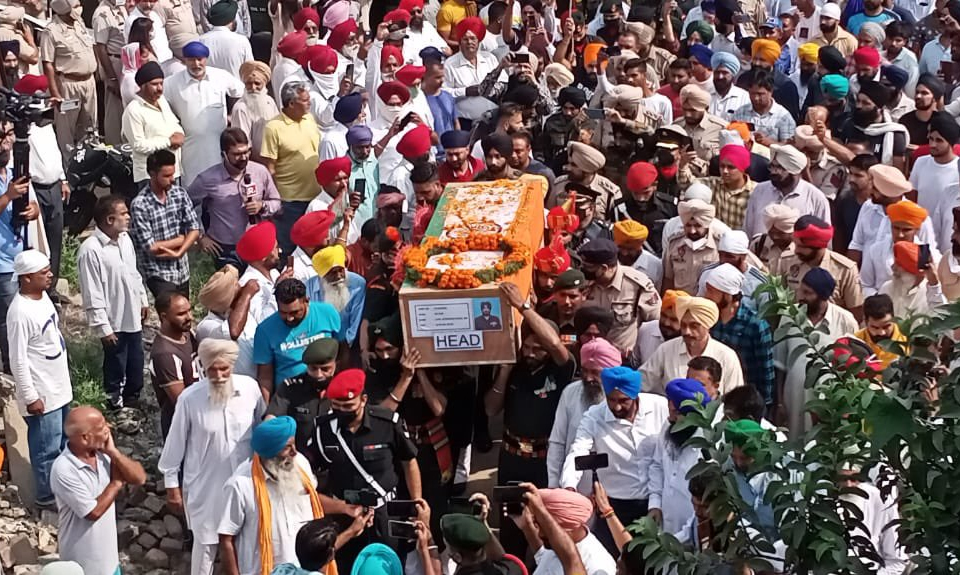 Kapurthala, Oct 13: The family of Naib Subedar Jaswinder Singh, martyred during an encounter in Jammu and Kashmir’s Poonch, mourned their loss as the mortal remains of the late soldier reached his native place at Mana Talwandi village of Kapurthala district in Punjab on Wednesday.
Mourning the loss of her husband, Naib Subedar’s wife Ravinder Singh said that the late soldier was about to come home for a 15-day leave.
“I spoke with him just one day back. He had told me that he would be home two days later, he had taken a 15-day leave. He had shown great valour so he was given Sena Medal. He wanted our son to join the Army,” she stated.
Jaswinder Singh’s mother Gurpal Kaur also expressed her grief over the demise of her son and said that it will be difficult to run the family now that they have lost the only breadwinner in the family.
“He was good and used to run the family, it has become difficult now. All those who lost their lives along with him were also like my sons. We don’t have land or property. What will we do? When my grandson grows up, I’ll send him to join Army,” she stated.
Earlier on Monday, one Junior Commissioned Officer (JCO) and four jawans of the Indian Army had lost their lives during a counter-terror operation at Jammu and Kashmir’s Poonch. (Agencies)