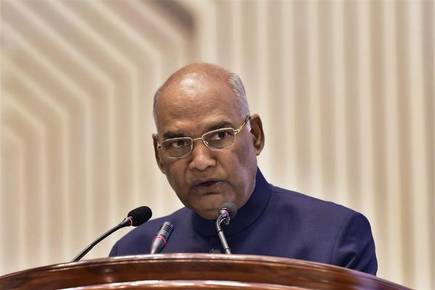 Excelsior Correspondent
JAMMU, Oct 13: President Ram Nath Kovind is arriving on a two-day visit of the Union Territories of Jammu and Kashmir and Ladakh on October 14 and 15 during which he will interact with Army Commanders and troops at Northern Command Headquarters in Udhampur, visit Sindhu Ghat in Leh and pay tributes at Kargil War Memorial in Drass in Kargil district.
This is second visit of Kovind to Jammu and Kashmir in less than three months. He had visited the Kashmir Valley from July 25-28. During the previous visit, he was also scheduled to pay tributes at Kargil War Memorial in the Union Territory of Ladakh but couldn’t fly there due to bad weather conditions.
Official sources told the Excelsior that the President will reach Leh tomorrow morning. After a brief halt in the town, he will leave for Sindhu darshan. He will return to Leh in the afternoon and fly to Northern Command headquarters in Udhampur.
The President, who happened to be the Supreme Commander of three Services, is scheduled to meet Army Commanders and troops at the Northern Command headquarters.
He is likely to be briefed by Northern command chief Lieutenant General YK Joshi.
On October 15, Kovind will fly to Drass in Kargil district in the Union Territory of Ladakh and pay tributes to the martyrs on the occasion of Dussehra festival.
He will reach Srinagar in the afternoon of October 15 and return to New Delhi from there.
Kovind couldn’t visit Drass, the second coldest inhabited place in the world and first in India located at the height of 10,800 feet from sea level, twice on the occasion of Kargil Vijay Diwas which is celebrated every year on July 26 as India had won the war with Pakistan fought in Kargil mountains for about two months in 1999 on this day. Nearly 550 Indian soldiers were martyred in the war. In 2019 after cancellation of Drass visit, he had paid respects to the martyrs at Badami Bagh Cantonment in Srinagar while in 2021, he had visited Baramulla War Memorial to pay tributes to the jawans after he couldn’t fly to Drass.
The President was schedule to fly to Drass from Srinagar for paying respects at the Kargil War Memorial on July 26 in 2019 and 2021 but on both the occasions he had to cancel the visit because of the bad weather conditions at Drass. In 2020, the victory celebrations were not held at Drass due to spread of COVID pandemic.
He will now visit Drass on October 15 for paying tributes to the martyrs.
Indian Army and Air Force had fought more than two month long war in the icy heights of Kargil in May, June and July 1999 to eliminate and push back the Pakistan army regulars and invaders who had occupied the hills. India won the war on July 26, 1999 and since then the day every year is celebrated as `Kargil Vijay Diwas’ across the nation. As against martyrdom of 550 Indian soldiers, Pakistan had lost more than 1500 regular troops and invaders.
The President will be breaking away from the tradition for celebrating Dussehra this year with jawans in Ladakh’s Drass area.
Traditionally, the President has been participating in Dussehra celebrations in the national capital.
According to a Rashtrapati Bhavan communiqué issued on Wednesday, the President will visit Ladakh and Jammu and Kashmir on October 14 and 15.
On Thursday, the President will perform Sindhu Darshan puja at Sindhu Ghat, Leh, the communiqué said.
He will also interact with troops at Udhampur in the evening.
On October 15, Kovind will pay tributes at the Kargil War Memorial in Drass and interact with officers and jawans.
Dussehra will be celebrated on Friday.