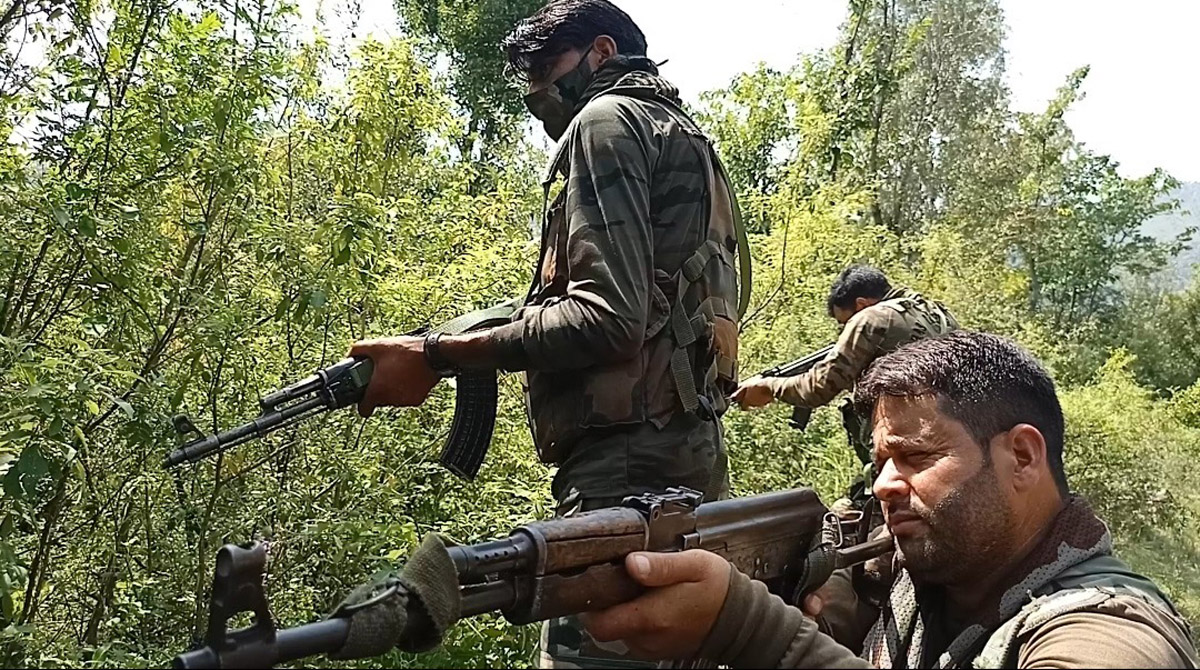 Militants fire from hillock, escape; hunt on
Traffic suspended on BG-Poonch highway
Sanjeev Pargal
JAMMU, Oct 14: Two more Army soldiers including a Junior Commissioned Officer (JCO) and one Naik were martyred and another jawan was injured as fresh encounter erupted between militants and troops in dense Bhatta Durrian forests in Mendhar tehsil of Poonch district while the ultras remained untraced for fourth consecutive day today.
Two fresh casualties have taken toll of Army personnel since the gun battle first broke out at Chamrer forests of Surankote on October 11 to seven, two of them JCOs.
Authorities have ordered suspension of traffic on Bhimber Gali-Poonch National Highway as the forests overlook the main road and advised population living near vicinity of Bhatta Durrian forests to stay home while additional reinforcement has been rushed to the spot.
Apparently, as per security officials, the militant group appeared to be same which first struck at village Chamrer in Surankote tehsil of Poonch district, bordering Panghai area of Thannamandi in Rajouri district on October 11, killing five Army personnel including one JCO and four soldiers.
Chamrer forests are on left side of the ridge while Bhatta Durrian jungle is on right.
“While the troops are hunting the militants, the group which struck at Chamrer on Monday and Bhatta Durrian today appeared to be same. Exact number of the militants is yet to be ascertained,” DIG Rajouri-Poonch range Vivek Gupta told the Excelsior.
He said traffic on Bhimber Gali-Poonch National Highway has been suspended as a precautionary measure as Bhatta Durrian forests are just couple of kilometers from the main road.
Reports said the troops which have launched massive search operations against the militants in Surankote, Mendhar and Thannamandi forests in Pir Panjal mountains established fresh contact with the militants at 5.30 pm. However, the militants had advantage of hiding at hillock and fired heavily at the troops approaching towards them.
In the exchange of gun fighting, an Army JCO and a jawan were martyred while another soldier was injured. The injured soldier has been hospitalized.
Additional troops were rushed to the forests to intensify searches for the militants with the onset of dawn tomorrow.
Senior officers of Army, CRPF and Jammu and Kashmir Police are supervising the operation which has turned out to be one of the longest encounter so far lasting four days. Also, the number of Army casualties has risen to seven.
“It appeared that the militants had been camping in the forest area for past quite some time and might have set up their hideout in the forests,” sources said but added that the things would be clear only when the militants are killed and troops destroy their hideouts.
An official said there were reports about presence of three to four militants in Rajouri and Poonch districts and this group might be the part of that.
In August this year, Army had killed three militants at Panghai in Thanna Mandi area of Rajouri district. A JCO had attained martyrdom in the attack. One of the slain militants was from Shopian while two others were Pakistanis. They had infiltrated few days prior to their killings.
There have been number of encounters in Rajouri and Poonch districts this year but troops had succeeded in neutralizing the militants mostly on the LoC or close to the site of infiltration.
Three militants were killed in Sunderbani and one in Nowshera sectors of Rajouri district. In Sunderbani, two soldiers were martyred while in Nowshera one jawan was injured. Prior to that, one militant was killed in Kalakote.
However, according to sources, most of the infiltration attempts by the militants on the LoC in Rajouri and Poonch districts are aimed at reaching South Kashmir via Pir Panjal mountains or Mughal Road.
Meanwhile, Army and police today recovered 42 live rounds of SLR from village Kore in Mahore area of Reasi district.