Home Kashmir HM rules out dialogue with Pak, will talk to youth of J&K...
Kashmir 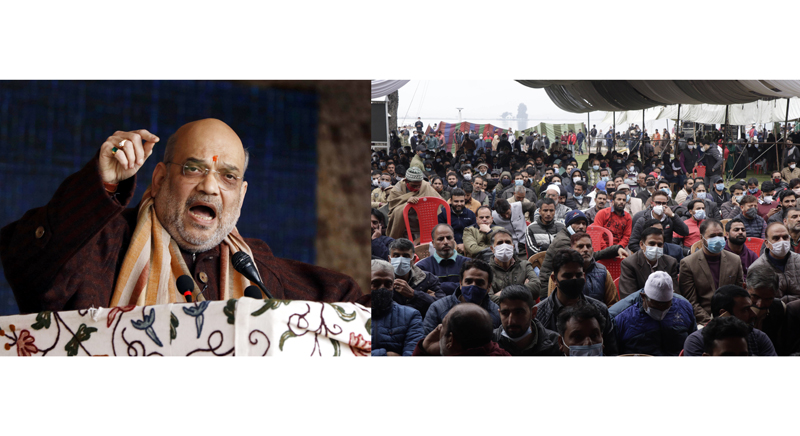 Srinagar, Oct 25 : Union Home Minister Amit Shah today ruled out dialogue with Pakistan and said that he would rather talk to people of Jammu and Kashmir and its youth.
Shah in his address to a public gathering at SKICC lashed out at the National Conference president Dr Farooq Abdullah for advocating dialogue with Pakistan and said that if he would talk, it would be people of J&K and its youth only and no one else.

Shah praises LG
Union Home Minister Amit Shah today praised Jammu and Kashmir Lt Governor, Manoj Sinha for his dedication to serve the people here.
While lauding the dedication of Sinha, the HM said that he didn’t even go home on Karva Chauth. “They used to go and spend months in England and the issues of people used to remain unaddressed. But see, Manoj sahib has remained in J&K even on Karva Chauth, he didn’t go home”, he said.
Shah hoped that the new Chief Minister of J&K would work on the same lines as the LG is doing.
“He has dedicated himself to the service of people round the clock. I hope to see the next CM of J&K working on the same lines as he (Manoj Sinha) does; the CM who won’t go on vacations to England, but remains well within the people of J&K and listen to their issues”, he said.